Update: Anastasia Rodionova was the first Australian woman to win through to the second qualifying round of the 2014 Australian Open today 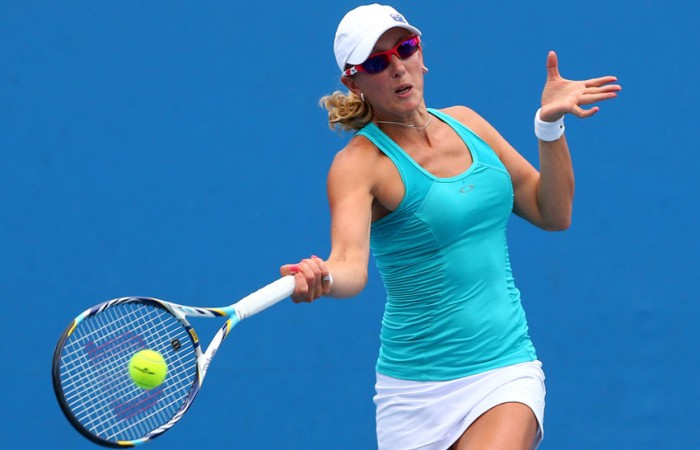 Anastasia Rodionova was the first Australian woman to win through to the second qualifying round of the 2014 Australian Open today. Rodionova upset No.2 seed Coco Vandeweghe 6-4 6-4 in a match played in 31 degree heat which took just over an hour and a half to complete.

Rodionova was pleased with her win against the big serving Vandeweghe.

“I feel like I played good tennis. It’s always tough to play against someone who is serving 40km/hr faster than you, so I really had to focus on my returns and put a lot of pressure on her serve. I feel like I done it well, I forced a few double faults.

Rodionova did not drop a service game during the match and said it was the part of her game that she was most happy with.

“I was pretty happy with the way I was serving myself. I placed the serve well which didn’t give her a chance at the first big hit. If there was points more than two shots, most of them I was winning.”

Rodionova said she was never worried about the warm conditions and actually enjoys playing in them.

“It is warm, but I was here for all of December practicing, exactly on this court. I feel good and it’s a home tournament, I’m used to the conditions and I love playing here.”

The home town support is also a factor that Rodionova enjoys about playing in Melbourne.

“I love playing in front of my family and friends and all of the Australian crowd. All of my friends came to watch and I love, love it.”

Earlier, 15-year-old Sara Tomic showed experience above her years to put in a fighting performance in the first match of qualifying for the Australian Open today. Tomic went down to experienced tour campaigner Tamira Paszek of Austria 6-2 7-5. The match would have been a great experience for the young Australian who managed to make the world No.180 work hard during a 54 minute second set.

British No.7 seed Heather Watson proved too good for Australia’s Arina Rodionova with a convincing 6-4 6-3 victory.

Tammi Patterson also went down in straight sets to the French tour veteran Stephanie Foretz Gacon. Gacon took the match in just over an hour, 6-2 6-3.

Maddison Inglis pushed Russian No.19 seed Marta Sirotkina to a tiebreak in the first set of their encounter. However the experience of the Russian showed, particularly under pressure and she went on to take the match 7-6 (4) 6-3.

Priscilla Hon met a tough opponent in the No.185 ranked Nicole Gibbs. The American Gibbs was too strong for Hon winning 6-1 6-0.

Naiktha Bains staged an epic second set battle in her match against No.17 seed Andrea Hlavackova. Both players had multiple set-point opportunities before the set eventually went to a tiebreak. The 27-year old Czech eventually proved too good, taking out the match 6-2 7-6 (3).