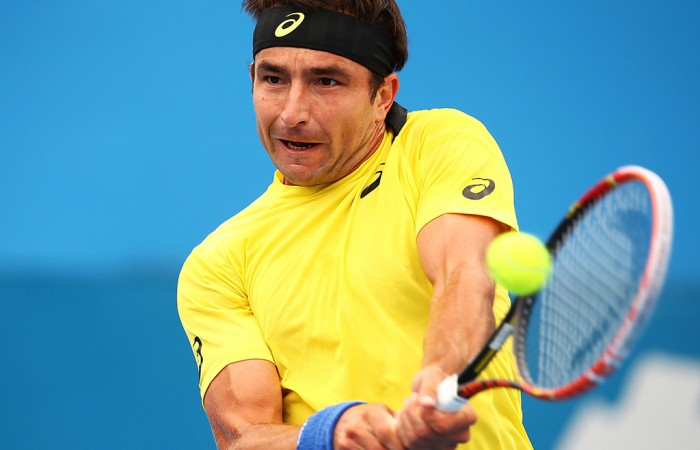 Matosevic, who had never won a main-draw match in Australia before this summer, is suddenly through to the quarter-finals for the second week in a row after also reaching the last eight at the Brisbane International.

But after running head first into a white-hot Federer in Brisbane, the Australian wildcard will meet Stakhovsky, a qualifier from Ukraine, for a possible semi-final shot at countryman and titleholder Bernard Tomic.

Matosevic, though, has good reason to be wary of the world No.101 despite having had his measure in their last meeting at the 2012 Shanghai Masters.

For it was Stakhovsky who sensationally halted Federer’s run of 34 consecutive grand slam quarter-final appearances with a second-round ambush of the Swiss master at Wimbledon last year.

“Obviously he can take that to the grave, beating Roger Federer on Centre Court at Wimbledon,” Matosevic said after upsetting Italian third seed Andreas Seppi 6-3 6-4 on Wednesday.”

“He’ll take that. That’s one of the greatest accomplishments you can have in this sport.”

“But I’m feeling confident. I beat him the last time we played.”

Ranked 56th in the world, Matosevic feels a much better player than that after claiming a series of top-20 scalps in 2013.

“My highest ranking is 39. I definitely think I can go higher,” he said.

“I don’t want to talk about goals, what my coach, Mark Woodforde, has set up.”

“He has lofty goals for me. He believes in me, and so do all the other Aussie greats.”

“But I don’t want to talk about them and put any pressure on myself like other players do … time will tell.”

Focused only on Stakhovsky, Matosevic is also refusing to let his mind wander to a potential semi-final showdown with Tomic in Sydney.

“I don’t really look forward. I’ve done that before. Every tennis player has looked ahead and then you lose,” he said.

“So I’m just concentrating, you know, like the old cliche, one match at a time.”