Casey Dellacqua is confident partner Ashleigh Barty's injury is improving as the star Australian pairing look to go one better and win an Australian Open title. 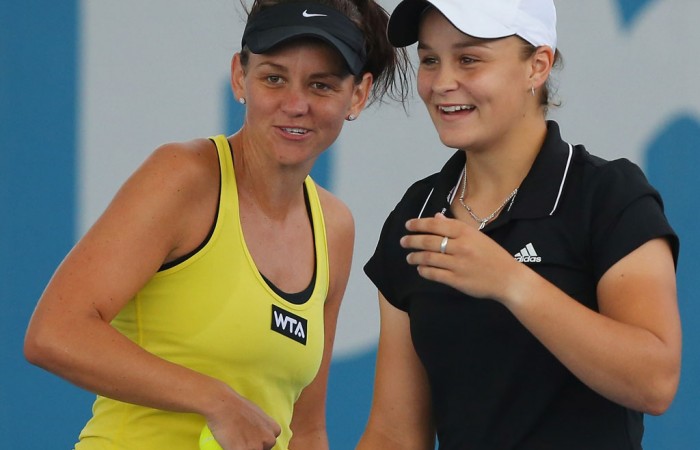 Casey Dellacqua is confident partner Ashleigh Barty’s injury is improving as the star Australian pairing look to go one better and win an Australian Open title.

Dellacqua and Barty made the doubles final in Melbourne last year before following it with appearances in deciders at Wimbledon and the US Open.

The duo’s brilliant 2013 looked set to continue until Barty was forced to pull out of tournaments in Brisbane and Hobart with an adductor tear.

“Apparently she’s improving and she’s back on court and she’s practising, so hopefully that’s a good sign,” Dellacqua said after her second-round loss in Hobart on Tuesday.

The West Australian said the pair would need to play catch-up after their plans to play the lead-up events together had to be jettisoned after just one match in Brisbane.

But she said the No.10-ranked doubles team would still be a force to be reckoned with in Melbourne.

“When we’re both healthy we’re definitely one of the best doubles teams in the world and we showed that last year,” Dellacqua said.

“We’ve played enough together now to know we’re a good team and hopefully we can go one better than we did last year.”

Dellacqua, though, says she is focusing on her singles game despite a 7-5 4-6 6-3 second-round loss to 55th-ranked American Alison Riske in Hobart.

The 28-year-old says she’s better than her current ranking of 125.

“I definitely feel like I belong inside the top 100,” she said.

“I feel like I’m there and I can compete with these girls on a weekly basis.

“I definitely feel like that’s a realistic goal for me.”