Australian No.1 Bernard Tomic can't wait to begin his ATP title defense at the Apia International Sydney this week. 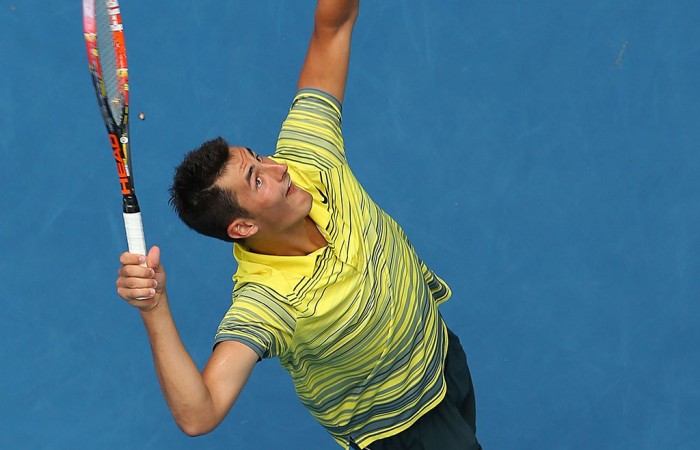 Australian No.1 Bernard Tomic can’t wait to begin his ATP title defense at the Apia International Sydney this week.

“Everyone has their off time. Some people use it differently than others,” Tomic said on Saturday.

“But I’m back into tennis now, back into tournaments, and this is something that is very important for me and I’m ready for the Australian summer and hopefully I can do better because each year I’ve started doing better and better in Australia.

“So hopefully this is going to be an even better one.”

Tomic had two wins from three matches at this week’s non-sanctioned Hopman Cup, but admits having to defend a truckload of rankings points accrued from triumphing in Sydney last year and then reaching the Australian Open third round brings added pressure.

“But I always have pressure in Australia to play well and I always manage to do that,” he said.

“This week is a new challenge for me – it’s my first defence – and I’m ready.

“Last week was really good. I managed to play really well so I’m taking good confidence into Sydney this week.”

Unlike Australia’s top-ranked woman, Samantha Stosur, who has a dreadful record in Australia, Tomic thrives when playing in front of his home fans.

“I’m the sort of guy that needs that extra energy to lift and when I play in Australia, I have that,” he said.

“The support gets behind you and I manage to turn on and stay focused and consistent throughout the match.

“Sometimes when I’m away from Australia, I lose that.

“But I won an Australian Open junior (title) at 15. From then on, I’ve loved it, playing here. It’s so good – and I’ve managed to play well.”

Ranked 51st in the world, Tomic needed a wildcard into the Sydney event and was pleased to avoid top seed Juan Martin del Potro at Saturday’s draw.

He instead opens against Spanish eighth seed Marcel Granollers.

“It’s a tough match but I’ve been in Australia for the last few months and I’m sure he’s only been here for not too many days, so that’s an advantage that I have,” Tomic said.