Like her older brother Bernard, teenage tennis star Sara Tomic wants to be world No.1, and not even a straight-sets loss in her first-ever WTA Tour match on Friday was a setback for the talented 15-year-old. 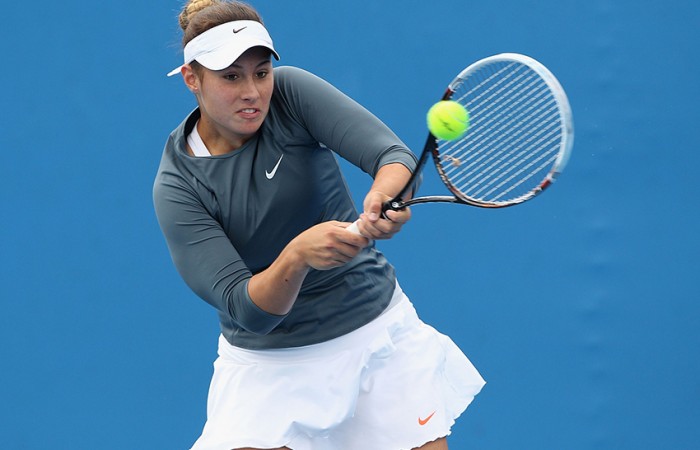 Like her older brother Bernard, teenage tennis star Sara Tomic wants to be world No.1.

And not even a straight-sets loss in her first-ever WTA Tour match on Friday was a setback for the talented 15-year-old.

“Just a little hiccup,” said Tomic, after losing 6-4 6-1 to Dutchwoman Kiki Bertens in the first round of qualifying for next week’s Sydney International.

A national under-14 claycourt champion, Tomic is young woman in a hurry – but knows she has to wait.

“We’re getting there. I know it’s a very slow process. I want to be like No.1 right now, but I can’t,” Tomic said.

“I have to work harder. You see Serena, it took her 10 years to come to where she is right now.

Big brother Bernie, the defending men’s champion in Sydney, won the Australian Open junior title at 15 and his ambitious little sister isn’t ruling out matching the feat at Melbourne Park this month.

“Anything’s possible, to be honest,” she said.

“I hope so. I hope so. I just never back down. That’s all I remember. All the hard work that I’ve done, I just hope that everything will come.

“(But) it doesn’t matter if he beat me in this. I’m just focusing on the real one. Maybe I’ll be No.1 before him, you never know.”

Tomic admits Bernard – the youngest Wimbledon quarterfinalist since Boris Becker in 1986 – is her idol.

Not that she calls on him for too much on-court advice.

“He’s more of a Play Station person,” she said.

“Even a text message from him is awesome. It makes my year.”

That’s because she often goes months without seeing Bernard or her father and mentor John.

“Before the US Open, I didn’t see him for about three months and that was tough,” she said.

“I didn’t see my dad or my brother. Once I saw my brother, I was so excited.”

Already 175cm tall, Tomic also wants to sprout in her late teens like Bernard did.

“I want to be huge. Have a big serve. That’s gonna be cool.”