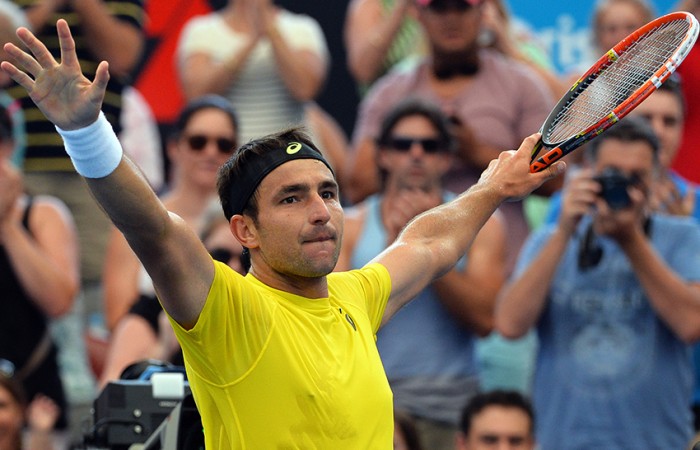 It doesn’t appear to have toned down his on-court emotions, but Marinko Matosevic believes new coach Mark Woodforde’s work with him played a key role in reversing his Australian form.

The Australian No.3 went into this week’s Brisbane International having failed to win in any of his past nine main draw matches on home soil.

Now Matosevic has racked up two wins in a week and finds himself in the quarterfinals in Brisbane following a hard-fought 5-7 7-6(3) 6-4 win over American Sam Querrey at Pat Rafter Arena on Wednesday.

The 28-year-old credits Woodforde, who became Matosevic’s coach following last year’s Wimbledon, helping him regain focus on his tennis as he battled a personal off-court issue.

“I was going to pull out of the whole US Open Series and US Open and go home,” Matosevic said.

“He saved me there. I went on to make quarterfinals of Washington, almost semis. I was close to beating (Dimitri) Tursunov. Then made quarters of a Masters Series there and then had pretty good results.

“My last match of the season I lost to Ferrer in three; he’s No.3 in the world, so I was playing well before the shoulder and I owe Mark a lot.”

In Wednesday’s match, Matosevic fought back from 2-0 down and saved two set points in the 10th game before succumbing when a backhand return found the net, gifting 26-year-old Querrey the first set.

Matosevic had his service game threatened in the second set but forced a tie-break which he blitzed 7-3.

Fired up by the crowd, Matosevic jumped to a 3-0 lead in the third, only for world No.46 Querrey to break back in the seventh game but the Australian was not to be denied.

He said his poor record in Australia had a lot to do with tough draws but he was feeling good after overcoming Querrey and France’s Julien Benneteau in the opening round.

That confidence will be severely tested in his next match however, with a quarterfinal looming against 17-time Grand Slam champion Roger Federer.

“It would be nice to play the greatest player of all time obviously,” Matosevic said ahead of Federer’s victory against Finn Jarkko Nieminen.