It was a defeat, and a heavy one, but Australia’s Casey Dellacqua left the Brisbane International with a smile on her face. 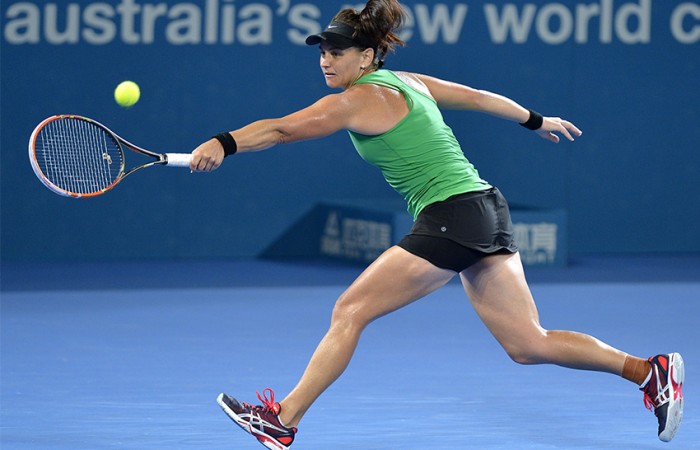 It was a defeat, and a heavy one, but Australia’s Casey Dellacqua left the Brisbane International with a smile on her face.

While the West Australian had been comprehensively defeated by world No.2 Victoria Azarenka 6-3 6-1 at Pat Rafter Arena, the thrill of challenging herself against one of the world’s best players overtook any disappointment she felt.

Dellacqua is trying to re-establish herself on the WTA Tour singles circuit after injury stalled her career following her breakthrough year in 2008 when she reached the fourth round at the Australian Open and climbed into the world’s top 50.

While Wednesday’s match shows just how far she is from those heights, Dellacqua said she’s just enjoying having the opportunity to tackle opponents such as the Belarusian.

“It’s pretty relentless when you play a No.2 player in the world,” she said.

“That’s the difference when you play someone even top 100. You get those free pins here and there, but to play someone No.2 in the world, it’s relentless. It’s just a whole another level and different intensity for me.

“I really enjoyed it, and I can take a lot from that match I think.”

Dellacqua will now head south to play in next week’s Hobart International, where she’s aiming for a couple more high-profile matches leading into the Open at Melbourne Park.

“To be out there on centre court playing, it’s pretty exciting,” she said.