Veteran Lleyton Hewitt will be one of several Australian men hoping to continue the bright start by local players at this year's Brisbane International. 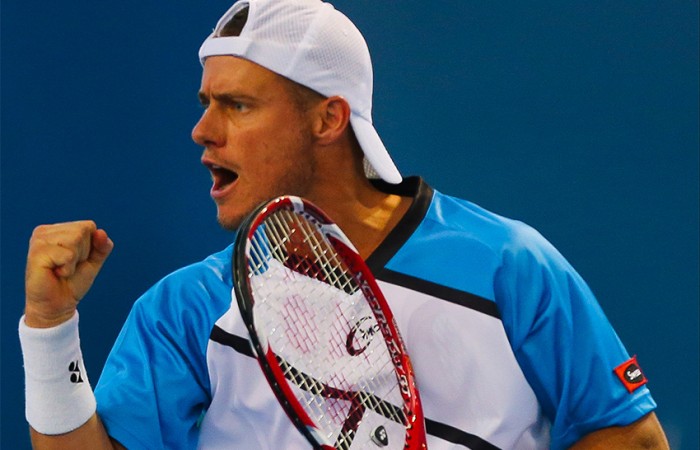 Veteran Lleyton Hewitt will be one of several Australian men hoping to continue the bright start by local players at this year’s Brisbane International.

Hewitt will be the feature match of Tuesday’s evening action when he takes on teenage qualifier Thanasi Kokkinakis in an all-Australian first-round clash at Pat Rafter Arena.

The two-time Grand Slam champion will be aiming to join Marinko Matosevic in the second round of the tournament after Matosevic claimed a thrilling 5-7 6-4 7-6(4) win over France’s Julien Benneteau at Pat Rafter Arena on Monday.

Matosevic’s win, his first in 10 attempts in the main draw of a top-tier event in Australia, was followed by victories to Casey Dellacqua and teenager Ashleigh Barty in the women’s draw.

Dellacqua set up a second-round clash with world No.2 Victoria Azarenka after a 3-6 6-2 6-3 win over Kazakhstan’s Galina Voskoboeva.

Barty, 17, will face the match of her brief career in the second round after she upset former world No.5 Daniela Hantuchova.

The 2011 Wimbledon girls’ champion will take on four-time major winner and world No.4 Maria Sharapova after the Russian cruised past France’s Caroline Garcia 6-3 6-0 in an ominous display.

Barty said the triple Australian success had been a great outcome.

“Marinko’s match was a great match,” she said.

“He fought really hard and had a really good win. And then Casey, it’s really awesome for her to get a few more singles wins.

“It’s exciting that all three Aussies on centre court today had a win.”

Other Australians in action today include Matthew Ebden, who was set to face compatriot Nick Kyrgios before the latter withdrew on Monday with a shoulder injury.

Ebden will now take on a lucky loser in the opening match of the day at Pat Rafter Arena from 11.30am AEST.

Samuel Groth will round out Tuesday’s action in the final match of the day against American Ryan Harrison.

Apart from the Australians, the other main drawcard of the day will be world No.1 and 17-time Grand Slam winner Serena Williams taking on Germany’s Andrea Petkovic from 2pm AEST in a second-round clash.