UPDATE: Casey Dellacqua has set up a blockbuster second round match against Victoria Azarenka after coming through a tough three-set match against Galina Voskoboeva. 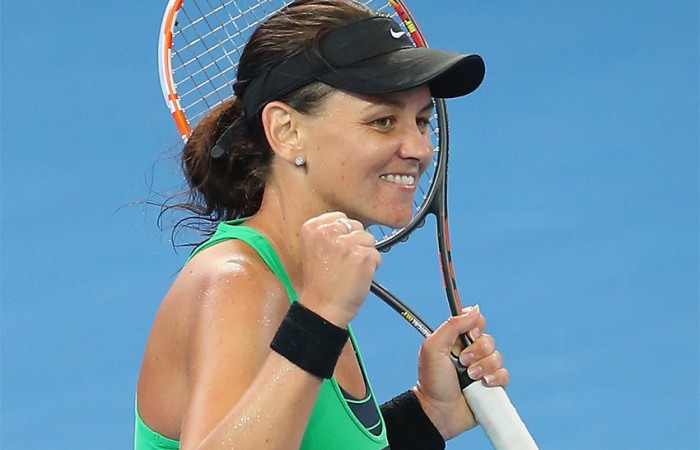 Casey Dellacqua is looking forward to her second round clash against second seed Victoria Azarenka at the Brisbane International after an excellent first round win on Monday.

Dellacqua, 28, freely admits she’s unlikely to overcome a player 140 places higher than her world No.142 ranking but if the West Australian was fazed by the draw she wasn’t giving much away.

“At this point in my career that I get to play an opponent like Vika is a great opportunity, and I’m going to enjoy the moment in front of the Australian crowd and just try and do what I do well,” she said.

“Whatever happens will happen. Certainly want to enjoy it and enjoy being out there playing a little bit of tennis.”

Dellacqua, who was always likely to face a tough second-round clash after being pitted in the side of the draw featuring five current or former world No.1s including 17-time major champion Serena Williams, is just enjoying rebuilding her singles career after a troubled run with injury and illness.

Despite losing the opening set in humid conditions, Dellacqua bounced back strongly to take out the match in one hour and 52 minutes.

“I’m very excited with the thought of playing someone like Vika just to really see where I’m at,” she said.

“It’ll be another test for me and another challenge. You play to play on the show courts and play with the best players in the world.”