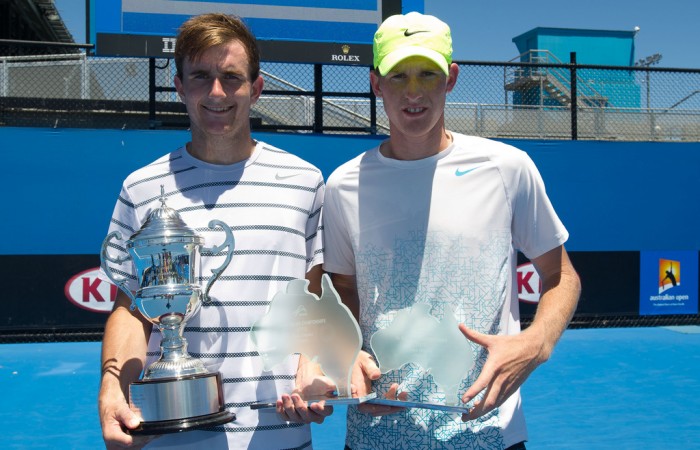 The top two seeds in the boys’ event, Mousley and Bourchier have grown up playing each other, share a coach and are friends off court.

“We know a lot about each other, we travel the year with each other, so we know each other’s games pretty well,” said Mousley.

But all friendships were put aside in Saturday’s final as the two traded furious ground strokes and a few words, each desperate to not just win the title but claim a wildcard into next week’s Australian Open 2014 Play-off.

Number one seed Mousley looked dangerous early, especially when he ventured forward to the net where he would invariably finish with a crisp volley winner.

It was a conscious game plan from the 17-year-old South Australian.

“I knew I had to come to the net, change it up against Bouch because you’ve gotta keep him on his toes, keep changing it up because when he gets in a rhythm he’s very good,” said Mousley.

It was Mousley who struck first after games stayed on serve early. Despite mixing up the pace of his ground strokes in an attempt to put Mousley off his game, it was Bourchier who found himself in trouble.

The Tasmanian offered Mousley three break points in the sixth game, the top seed clinching the break thanks to a forehand error from Bourchier.

From there Mousley barely put a foot wrong, offering Bourchier one chance to stay in the set in the ninth game but the South Australian served his way out of trouble to take the opening set 6-3.

Mousley was quick to pounce on any loose shots from Bourchier, punishing every short ball offered.

But Mousley didn’t have it all his own way. Bourchier refused to yield, contorting his lithe frame into all manner of angles to retrieve balls that had seemingly passed by him.

Sadly for Bourchier his luck ran out late in the second set as a string of unforced errors, including a double fault on break point, handed Mousley a vital second-set break of serve and the opportunity to serve for the match.

This time it was Bourchier’s turn to get one back on his friend. The fired-up Tasmanian leveled the set at five games apiece only for Mousley to promptly break again and take a decisive 6-5 lead.

Mousley held his nerve to serve out the match, add another national title to his long list of achievements, but more importantly give himself a chance at winning an Australian Open wildcard.

“I’m always happy with the win, couldn’t be more pleased,” said Mousley. “I just wanted to try and get a good start, [I] played with a lot of purpose.”

The importance of the occasion was not lost on Mousley who admitted later that “I don’t mind playing in the bigger matches.”

And he’s got some coming up. Looking forward to Sunday’s AO Play-off draw, Mousley said he doesn’t mind which of the other 15 hopefuls he plays.

Should Mousley have a similarly winning week, he could find himself in possession of an Australian Open wildcard come next weekend. And having watched good friend and last year’s 18s Australian National Champion Nick Kyrgios use this event as a springboard to a successful 12 months, Mousley believes that he could do the same.

In the battle between the fifth and eighth seeds, it was Inglis who trumped Hives to secure her first Australian Nationals title.

Both players broke the other early, but it was eighth seed Hives who strung together four games in a row and looked to be in control.

Despite feeling nervous, Inglis wrested the opening set back from the Victorian, taking it in a tiebreak.

The second set began with three consecutive breaks as both players fought for momentum. But again it was Inglis who held, her backhand proving to be a significant weapon.

“I think she’s gotten better match by match, both physically and emotionally she’s been improving as well.”

Inglis will now prepare for her next challenge, the Australian Open 2014 Play-off.