Jaimee Fourlis and Alex De Minaur have been crowned the 14/u singles champions after defeating each of their opponents in straight sets. 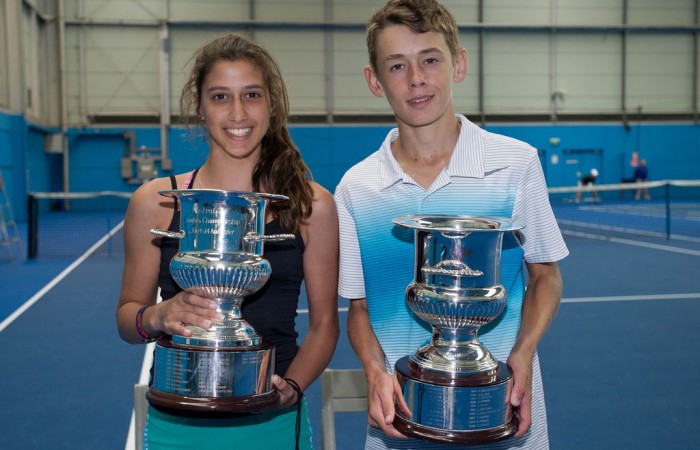 Jaimee Fourlis and Alex De Minaur have been crowned the 14/u singles champions after defeating each of their opponents in straight sets.

With near perfect tennis weather conditions at 9am, Fourlis began on serve to face Violet Apisah for the first time. Not having had the chance to watch her opponent play in the past, Fourlis admitted it was more challenging to prepare a game plan.

> View all 14/u Australian Championships results

“I did know that she’d be very consistent and I just thought I had to attack her weakness which is her forehand. So I just had to stick with her during those long rallies,” she reflected after the final.

Fourlis refused to allow a minor dispute with the umpire early on in the match to shake her resolve and instead used her temporary frustration to fuel a comfortable close out of the first game. Remarkably, some of the Melburnian’s best tennis was seen just after she had made an unforced error that spurred her into action.

While both displayed maturity and composure beyond their years, there was quite a contrast between the two girls’ personalities on court. Fourlis allows her passion and determination to shine through while Apisah is very cool, calm and collected, making her shots look effortless.

These girls had their eye on the prize throughout the entire match, always in the moment and never getting lazy in their shot placement or movement on court. But it was Fourlis who was more consistent on the day, charging to an early lead and finally seized a 6-1 6-0 victory.

The small crowd gathered before court 10 witnessed some terrific rallies, with incredible angled lobs that made for an exciting display of tennis performed by two highly intelligent young players.

Growing up among quite the tennis-oriented family, Fourlis, an all-round sporty teenager, is no stranger to a tennis final, having clinched the 14s National Claycourt Championships in Ipswich earlier this year and having admittedly won a few tournaments last year as well.

The wind picked up to an extent as the boys’ final between No.1 seed Alex De Minaur and fourth seed Louis Corker got underway at 10.30 am. Although the wind turned out to be the least of their worries as they experienced on-and-off downpours throughout the morning, interrupting play on three occasions.

Having trained together in Europe for some time, the boys were somewhat familiar with one another’s game but this was to be their first encounter in a tournament.

Corker used his height to his advantage, pounding down his serves and aiming for the body of his sprightly opponent. De Minaur definitely did not permit the height of his opponent to intimidate him, the confident Sydneysider placing significant pressure on Corker’s service and playing to his backhand until he could find an opening to launch a forehand winner.

De Minaur’s admiration for the ever so elegant Roger Federer often came across in his game as the 14-year-old’s fluid movement across the court and intelligent positioning often empowered him to dictate play from the baseline.

Rain drops could be felt from as early on as the beginning of the second set, momentarily delaying play. This was the first of a few interruptions that truly tested the boys’ ability to keep motivated and focused, making for a true mental game as they eventually came head to head for their final duel on the indoor courts to secure the trophy.

Corker returned with an undeniable hunger to commendably level the score 4-4, after being down 6-3 4-1 from when the rain had delayed play. De Minaur, however, dealt well with the pressure and followed through with his strategic play to clinch the final 6-3 6-4.

De Minaur also won the Optus 14s Autumn Nationals in Mildura at the start of the year after enduring a challenging three setter against Daniel Hobart. He expressed his delight at having closed out yet another victory and described what was running through his mind during the final wet weather interruption that lasted over half an hour.

“To be honest, I was getting pretty annoyed because I was up and when you’re up it’s always better to keep playing not to stop. I lost focus a bit and then everything started to get a bit tighter,” De Minaur said.

He emphasised the importance of keeping up his energy levels during the delay and explained how his physical trainer, Rudy Sopko, had him warming up as soon as it was confirmed that play was to resume on the indoor courts.

“At the end there were some really tough points, so it wasn’t an easy match.”

When not on the tennis court, De Minaur might be found at a driving range playing golf of a weekend to wind down from his daily tennis training regime.

His short-term goals for 2014 are to play more ITF tournaments to increase his ranking and then move on to play Junior Grand Slams. The ultimate dream for both champions is to one day see their names in the draw for the Australian Open.