The 2013 Asia-Pacific Tennis League (ATL) Victoria Conference has concluded with the Kooyong Classics and the RSY Royals being crowned conference champions. 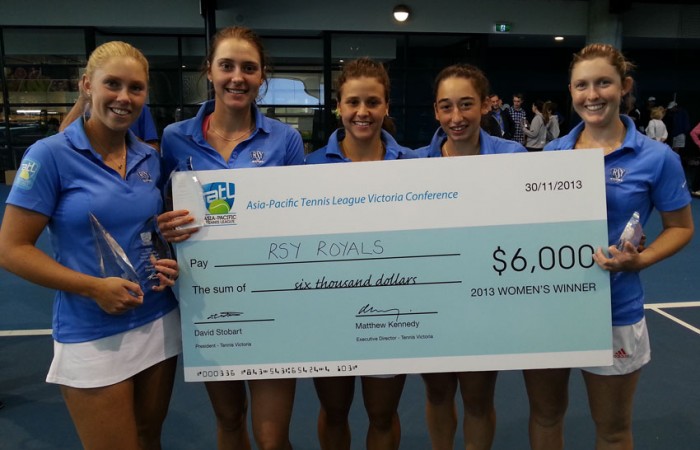 A 20-day storm of new-age tennis as part of the 2013 Asia-Pacific Tennis League (ATL) Victoria Conference has concluded with the Kooyong Classics and the RSY Royals being crowned conference champions.

A fantastic crowd attended Melbourne Park’s National Tennis Centre to see some brilliantly hard fought tennis; in the men’s final the Classics were too strong for the Dingley Dingoes, winning the first three rubbers and the first set of the fourth rubber to secure victory.

The women’s final was a nail-biter, the result determined in the final rubber. With the final level with two rubbers all and scores equal on sets going into the first of the doubles rubbers, the Royals’ team of Storm Sanders and Samantha Harris proved too strong for Sally Peers and Kate Antosik, winning 4-0 4-0.

When Kooyong’s Arina Rodionova and Ellen Perez beat the Royals’ Tammi Patterson and Azra Hadzic in the second doubles rubber 4-3 4-1, rubber and sets won were equal among both teams.

A countback on determined by games won saw the Royals crowned victors, winning 41 games to 38.

The Classics and Royals progress to the ATL Playoffs, held at Melbourne Park during Australian Open 2014 on 20-21 January.

On finals weekend in the ATL’s Queensland Conference, the Shaw Park Sharks (women) and Tennis Brisbane Chargers (men) were victorious at the Queensland Tennis Centre in Tennyson, Brisbane.

For more more news and results, visit the ATL website.