On a sunny Sunday, Petra Hule and Jaimee Fourlis continued to prove why they are the players to beat in the 2013 Australian 14-and-under Championships. 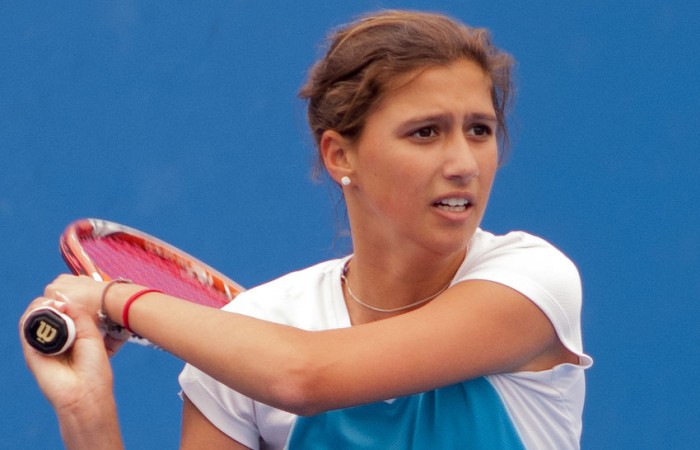 Side by side under sunny skies at Melbourne Park, top seeds Petra Hule and Jaimee Fourlis continued to prove why they are the players to beat in the 2013 Australian 14-and-under Championships.

Both won their matches in straight sets on neighbouring courts to establish themselves atop their respective round-robin groups, all the while offering an intriguing contrast in styles that will make for an entertaining final should they continue on their current collision course.

Hule, seeded No.1, was in control throughout the match against wildcard Olivia Gadecki, winning 6-3 6-1.

The South Australian was a picture of calm and focus, frequent taps on her leg a reminder to stay positive and keep going.

“I thought I did that pretty well today. I just tried to stay in there and keep the ball going as much as I could and to just work on the things that I’ve been working on to just put that in play. It worked well today,” she said.

Indeed, Hule did many things well out on Court 11 on Sunday. Her flat, powerful groundstrokes were overwhelming, and she ended many rallies in a single swipe if the ball came into her strike zone. One of the taller players in the draw, she nonetheless moved very well, bending low to meet several of Gadecki’s shots and firing them back with interest.

Yet she wasn’t entirely happy with her performance; immediately after the match Hule hit the practice court to work on some open-stance backhands with her coach.

“Sometimes I do some little mistakes so it’s good to just have that clear in my head what I did in the match and then to just quickly get on court to just practice that so I know what to do next time,” she explained.

Having now won both her round-robin matches so far in straight sets, Hule is clearly not focusing on the expectation that sometimes comes with the No.1 seeding.

“I don’t worry about it. It’s just a number next to a name, so it’s nothing. I’m as good as anyone here,” she said.

Fourlis’ win did not come quite as easily.

Battling 16th seed Jeanette Lin, the Victorian pocketed the opening set after a battle, but soon fell behind 2-1 in the second as Lin’s craftiness, angles and ability to keep the point going – which lead to some stunning all-court rallies – frustrated the No.2 seed into some errors.

Yet the expressive Fourlis impressively channelled her emotions, and went on to record a 6-4 6-4 victory.

Whereas Hule wins with first-strike tennis, Fourlis’ success is built around her excellent court coverage and damaging forehand.

Hitting that shot with authority throughout the match, the depth, shape and spin on Fourlis’ forehand frequent caught Lin out of position and won her many points, as did her footwork; the little adjustment steps Fourlis made set her up to play more forehands and also some point-ending swinging volleys that helped her maintain the upper hand.

In other matches, the 18s Australian Championships qualifying continued; you can check the scores and draws here: