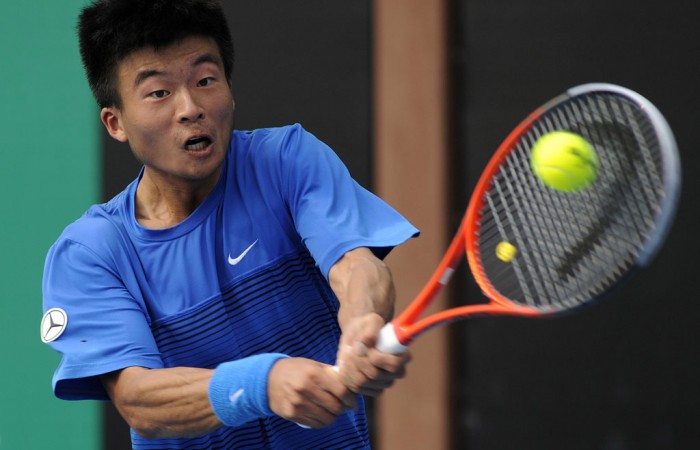 Third-seeded Wu scored victory again countryman Chuhan Wang; although hit off the court in the first set by the aggressive Wang, he struck back to win the second set. Unfortunately, Wang started to feel the effects of a shoulder injury at the beginning of the third set and was forced to retire with Wu leading 4-6 6-1 1-0.

Wu said he was very relieved to get through a tough first round. “It’s very difficult playing a good friend. Wang played really aggressively today and I needed to change my game after losing the first set,” he said.

“It’s a shame for him to pick up the injury but I’m happy to go through.”

Meanwhile, Zhang got off to a slow start against 21-year-old He Feng, who took an early 4-1 lead.

Yet Zhang mixed powerful groundstrokes with sublime touch to work his way back into the first set, before winning a long game to take a 6-5 lead and eventually pocket the first set.

Games stayed on serve in the second set until Zhang broke serve following a marathon game which featured 11 deuces. He quickly gathered his breath to serve out the match and record a 7-5 7-5 victory.

Zhang will now face off against impressive Taiwanese 20-year-old Chieh-Fu Wang in the quarterfinals.

Earlier on Thursday, women’s second seed Erika Sema of Japan opened the  centre court action with a 6-2 6-3 victory over compatriot Miki Miyamura. Sema was in control throughout the match, proving too consistent and precise for her opponent.

Sema will next face China’s Wang Yafan, a player she knows well after losing to her in doubles on Wednesday.

The second seed said she would look for revenge on the singles court. “My sister and I were disappointed to lose doubles to Wang and Tan. I felt good on court today and hopefully can win tomorrow,” she said.