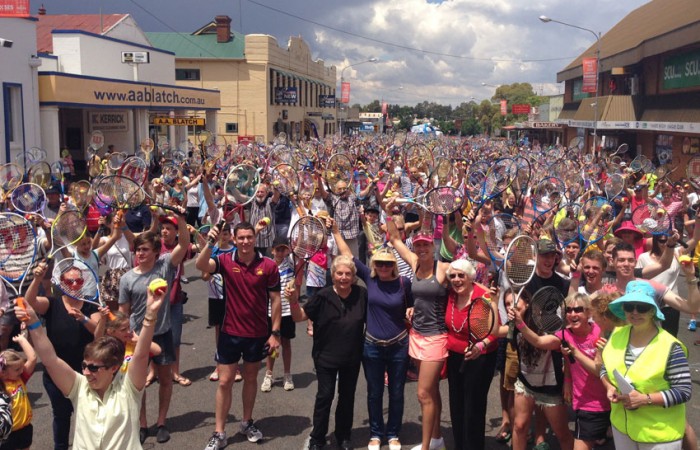 In a massive community activation inspirational local tennis coach Helen Magill galvanized the 10,000 strong sports-mad community in central-western NSW to come together to smash the world record of 658 people, set in New York, just before the US Open in 2011.

Young families, kids, grandparents and local organisations as diverse as car clubs, the Rural Fire Service and even the boys and girls in blue from the local police force came together in the main thoroughfare of Clarinda Street, which had been closed for the occasion.

Alicia Molik was thrilled with the enthusiasm of the community, all of whom stood patiently in line, and braved the occasional rain shower, to receive their numbered wristbands as part of the verification process.

> watch the record breaking feat and Moli’s interview on Sunrise

“What an incredible day for Parkes and for tennis,” Molik said.

“One of the things I love about tennis is how it can bring communities together and today is a perfect illustration of that. To see people of all ages engaged in the sport was tremendous. This is a great tennis town and with so many kids playing I’m sure it’s only a matter of time before we see a player of note come through.”

Organiser Helen Magill, winner of the 2012 Australian Tennis Award for Most Outstanding MLC Tennis Hot Shots Coach, was thrilled the day went off so well.

“We have a great town and it’s been terrific to see everyone come out and show their support today,” Magill said.

“All day kids, teenagers and adults have been on court playing MLC Tennis Hot Shots or Cardio tennis, trying out the AO Blitz challenges, admiring the Australian Open trophies and havings photos and autographs with Alicia Molik. To gather 772 people for our world record attempt was the icing on the cake. I hope it encourages even more people to get involved in tennis and the AO Blitz to give Parkes the best possible chance of snaring one of the top players in the Australian Open.”

The AO Blitz (aoblitz.com.au) is a national online challenge that allows people who play tennis – and those who have never picked up a racquet – the chance to win major prizes and have an Australian Open 2014 player represent their local town.

“The town leaderboard will go live on aoblitz.com very soon and I really want to see Parkes right at the top,” Magill continued.

*The world record attempt was overseen by an independent team of scrutineers who deemed that 772 people participated in the attempt and 709 people successfully completed the challenge.