Martina Hingis will return to Adelaide and bring Nicole Bradtke for a singles showdown at the 2014 World Tennis Challenge to be held 7-9 January at Memorial Drive. 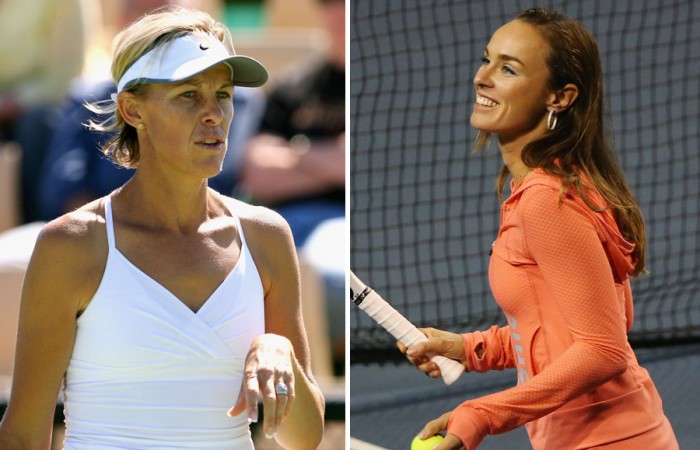 In a coup for event organisers, Martina Hingis will return to Adelaide and bring Nicole Bradtke for a singles showdown at the 2014 World Tennis Challenge to be held 7-9 January at Memorial Drive Tennis Centre.

Hingis, a 15-time Grand Slam champion, is excited to be returning to the World Tennis Challenge.

“I am really looking forward to my return to Adelaide. Australians love their sport and Adelaide is a great place for me to come and spend a few days.” said Hingis.

Nicole Bradtke who will be making her debut in January, is elated to be joining the field.

“The chance to play alongside the other players, especially the likes of Navratilova, Hingis and Austin is truly an honour,” she said.

“Apart from the great tennis, I’m looking forward to the entertainment side of the event.

“To play in a relaxed and fun environment with this calibre of players is a dream opportunity.”

Bradtke, who burst to prominence in 1988 when she made the French Open semifinals, went on to find further success with Mark Woodforde in mixed doubles; the pair captured the Australian and US Opens in 1992.

Woodforde, now a World Tennis Challenge co-tournament director, is thrilled to be welcoming Hingis back to Adelaide in January.

“We’re delighted they are both returning, and thrilled they are both bringing their mates, tennis greats Tracy Austin and Nicole Bradtke, which ensures some great women’s singles tennis.

“The 2014 event is certainly shaping up to be a stellar year with the four women signed, plus Mats Wilander, Yannick Noah, Pat Cash, Henri Leconte and Mansour Bahrami rounding out the legends’ field.

“Fans and Fox Sport viewers at home will be kept highly entertained with the player’s astonishing skill and unmatched hilarity from both the past and present players.”

Frenchman Chardy is looking forward to making his debut at Memorial Drive for the 2014 World Tennis Challenge.

“I have heard about the World Tennis Challenge and Adelaide from other tour players over the past years. Their feedback was very positive and so I am excited to be participating in the event,” he said.

“I think playing alongside some of the best current players and some of the most legendary players of the game will be a great lead in to the Australian Open.”

“We will have the world No.25, 30 and 34 coming to Adelaide in January. These players are preparing themselves for the Australian Open and crowds will witness some top level tennis at the iconic Memorial Drive,” Rasheed said.

“Our young gun, Thanasi Kokkinakis proved to be a great entertainer at the Hopman Cup last year. It will be great to have a young South Australian such as Thanasi in front of a home crowd interacting with the current and legend players, alongside Pat Cash in Team Australia.”

The 2014 World Tennis Challenge, celebrating its sixth anniversary in January, is an exhibition team event over three nights at the iconic Memorial Drive Tennis Centre.

A unique element is that two courts are used simultaneously each night with each player playing every night, while the public participation arm of the event – the Be Active Challenge – continues to be Australia’s largest tennis participation event with over 2,000 people playing tennis throughout January in a series of events across South Australia.

Minister for Tourism Leon Bignell said the State Government had been a proud supporter of the World Tennis Challenge since the event began in 2009.

“South Australia is renowned for its world-class events and festivals and it’s great to see the World Tennis Challenge continuing to grow,” Minister Bignell said.

“We look forward to welcoming legends of the game back to our state in January and encourage locals and visitors alike to come along and enjoy the action.”

World Tennis Challenge 2014 tickets are now on sale. Tickets for the event start from $9.90 for children and $19.90 for adults and can be purchased online at www.ticketek.com.au/bookadelaide or by calling 13 28 49.