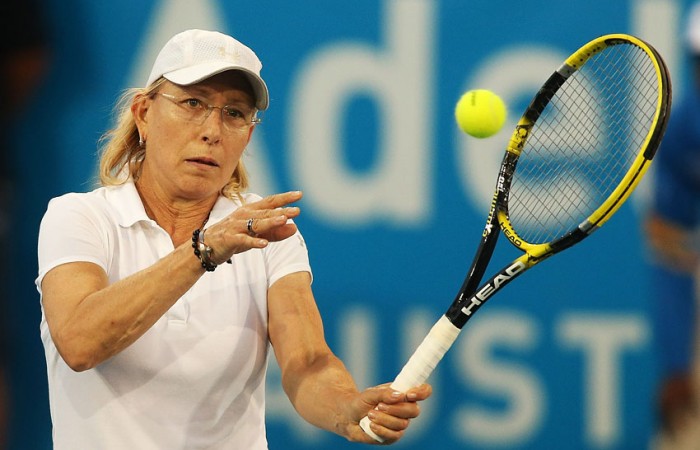 Tennis legend Martina Navratilova is returning to Adelaide and battling former world No.1 Tracy Austin in a singles showdown at the 2014 World Tennis Challenge.

Navratilova, a 59-time Grand Slam champion and Austin, the US Open champion in 1979 and 1981, will do battle on the sixth anniversary of the event on 7-9 January at Memorial Drive Tennis Centre.

On the men’s side, former World No.1 and seven-time Grand Slam Champion Mats Wilander will be joined by the legendary French Open champion Yannick Noah.

Current ATP tennis stars confirmed for the event include world No.25 Jürgen Melzer from Austria and No.30 Spaniard Feliciano Lopez.

The strong line-up ensures the spectators and Fox Sport viewers at home will be kept highly entertained with the player’s astonishing skill and unmatched hilarity.

The concurrent public participation arm of the event, the Be Active Challenge, continues to be Australia’s largest tennis participation event with over 2,000 people playing tennis throughout January in a series of events across South Australia.

Co-Tournament director Mark Woodforde is particularly elated with the addition of Tracy and Noah to the 2014 line-up.

“We’re delighted to bring this festival of tennis to Adelaide each year and who better to celebrate the opening of the Adelaide Oval plaza precinct with us, than a euro rock star such as Yannick Noah who will be making his WTC debut with us in January,” he said.

“It was Wilander who Noah defeated in the ’83 French Open final – so we’re anticipating sensational tennis between these great legends.

“Whilst in the women’s field, it was Austin who became the youngest ever US Open champion defeating Martina Navratilova in the 1979 semifinals and flattening Chris Evert in the final in straight sets at the age of just 16 years and nine months – so the singles showdown between these two ladies will be highly entertaining.”

Noah’s fond French Open memories will be rekindled with Leconte, his champion doubles partner at the 1984 French Open.

Noah began a successful music career in 1991 with the release of Black of What album which lead him to perform throughout Europe. He is the father of Joakim Noah, a two-time NCAA basketball champion (Chicago Bulls).

Wilander is one of only five men (along with Jimmy Connors, Andre Agassi, Rafael Nadal and Roger Federer) to have won Grand Slam singles titles on grass, hard and clay courts, having won the Australian Open when it was contested on grass at Kooyong. He joins Nadal as the only men in tennis history to have won at least two Grand Slam singles titles on each of the three surfaces.

Said co-tournament director Roger Rasheed: “The tournament continues to attract a strong current player line-up which is evident by the bevy of top players that choose Adelaide for their Australian Open preparation each year.

“We’re looking forward to welcoming two top 30 players to the field in 2014 and witnessing high level tennis at Memorial Drive.

“Our young gun, Thanasi Kokkinakis, proved to be a great entertainer at the Hopman Cup last year. It will be great to have a young South Australian such as Thanasi in front of a home crowd interacting with the current and legend players, alongside Pat Cash in Team Australia.

“We are looking forward to announcing the final current player in the coming weeks.”

Minister for Tourism, Leon Bignell, said the State Government had been a proud supporter of the World Tennis Challenge since the event began in 2009.

“South Australia is renowned for its world-class events and festivals and it’s great to see the World Tennis Challenge continuing to grow,” he said.

“We look forward to welcoming legends of the game back to our state in January and encourage locals and visitors alike to come along and enjoy the action.”