Following a successful transition to the ATP World Tour, John Peers talks to Australian Tennis Magazine about his background in college tennis and goals for the future. 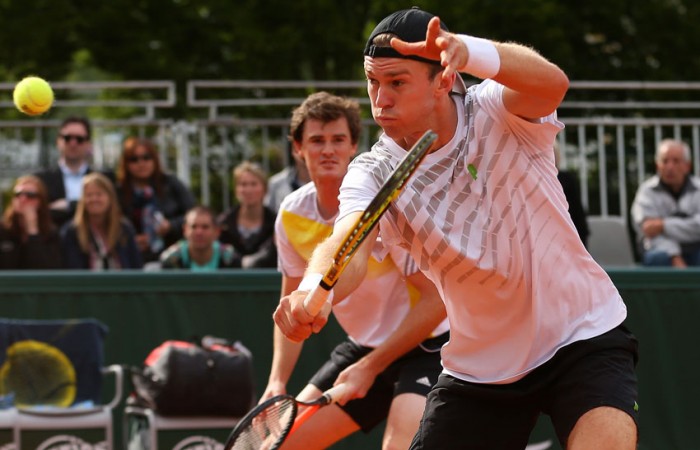 Following a successful transition to the ATP World Tour from Challenger level, Melbourne-born John Peers talks to GILLIAN TAN about his all-sports background, stepping up from college tennis and his goals for the future.

John Peers was born to be an athlete. He’s the son of Bill Peers, who played amateur AFL for Victoria, and Elizabeth Little, who won the Australian Open girls’ title in 1978 and competed in singles and doubles in all the Grand Slams except Roland Garros. In a memorable year, Peers claimed his first three ATP World Tour titles in Houston, Gstaad and Bangkok and reached the quarterfinals in his US Open debut, all with partner Jamie Murray. His doubles ranking has rocketed to a career-high No.32.

Why did you choose tennis  over AFL?

I wanted to be able to see more parts of the world than what other sports can offer and the chance to play Olympics and Davis Cup was another big attraction.

Can you talk about why you chose to go to college, following the footsteps of guys like John Isner and Kevin Anderson, instead of turning pro earlier?

I just felt that I wasn’t ready at the time to play a full-time schedule on the tour. Obviously I’m thankful for that decision, that I continued my study while I kept developing and got my game completely ready before going on tour.

What have you learnt this year, now you’re a Tour regular?

You just have to feel comfortable on tour, enjoy the lifestyle and love what you do. If you can’t do that, it’s not the right sport to be trying to play. It is great fun catching up with all the Australians at the Grand Slams; we’re starting to get the numbers back up which is good. I’ve also learnt to believe in myself. Even though some weeks are tougher than others, there are always people supporting you no matter where you are. It’s taken time to adjust to the lifestyle, to trying to produce performance after performance week-in, week-out. If you’re too up and down and too streaky, guys figure out what to do to keep you down.

How did your partnership with Jamie Murray, Andy’s older brother, come about?

Our schedules matched up at the start of the year. We were both looking to play the same tournaments so we thought ‘Why not? We’ll have a crack.’ We got into the first few events, and things sort of clicked from the start so we continued going and we’ve done alright so far (smiling).

I know it’s only early days, but what’s the highlight of your career so far?

The win over the Bryans in Houston, beating them was an unbelievable experience (Peers and Murray saved a match point). We were down and out the whole match, but we hung in there. Also playing mixed with Ash at Wimbledon and our run to the quarters here in New York. It is great making the second week of a Grand Slam, just to experience what it’s like to still be around at that stage.

What are your doubles goals?

The year-end championships are a little out of reach this year but they’re definitely a big goal for next year. Generally getting better day in, day out is key; and the results and everything else takes care of itself. You can’t really put a number on it, you’ve got to keep improving or else everyone will get ahead of you.

It must be tough booking your own travel and perfecting a schedule. Have you and Jamie had any travel misadventures?

This is a good one. We lost in Lyon and we were going to stay a couple of days. We went to breakfast and we thought we hadn’t made the cut for Houston, but we both got the email to say we were in. We looked at each other decided ‘Alright, let’s get out of here!’ There was one seat available on the first flight out, I got lucky and clicked purchase just seconds before Jamie. He had to go on standby and got the last flight out of there which was four or five hours later because some other passengers didn’t have their visas for the US sorted out. Our luck continued in Houston, which was great.