Young Lachlan Hewatt enjoyed the experience of a lifetime when he hit with former world No.8 and MLC Tennis Hot Shots Ambassador Alicia Molik in Canberra. 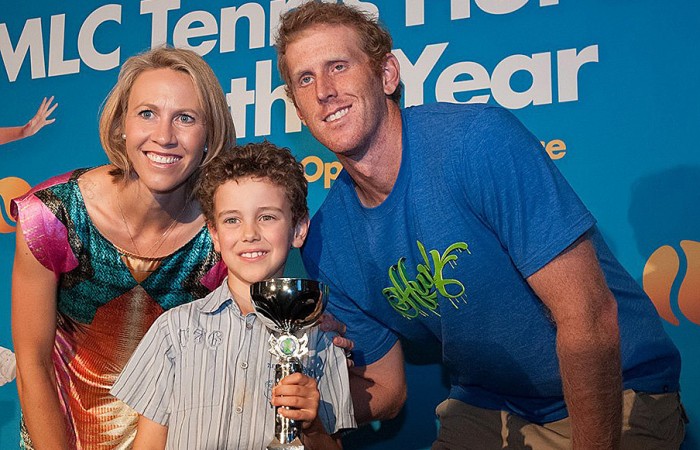 Nine-year-old Lachlan Hewatt (Ngunnawal, ACT) had the experience of a lifetime today when he was given the opportunity to have a hit with former world No.8 and MLC Tennis Hot Shots Ambassador Alicia Molik at Melba Tennis Club.

Hewatt was awarded the inaugural MLC Tennis Hot Shot of the Year award during the Australian Open earlier this year.

Thanks to MLC, Hewatt was one of 12 finalists flown to Melbourne for the Australian Open 2013, and enjoyed a once-in-a-lifetime opportunity to go behind the scenes at Melbourne Park, have a hit on Rod Laver Arena and attend the official MLC Tennis Hot Shot of the Year awards night.

Hewatt, who attends Ngunnawal Primary School, was the first ever winner of the competition which recognised his outstanding enthusiasm, sportsmanship and effort put into the MLC Tennis Hot Shots program.

As part of the accolade, Lachlan was awarded a private lesson with Alicia Molik and three friends, a year’s worth of coaching at his local club, and $5,000 courtesy of MLC.

“It’s been awesome having the chance to have a hit with Alicia,” Hewatt said.

“She is really nice and encouraging and was able to give me some great tips to improve my tennis. She’s an amazing player and can hit lots of cool shots.

“I’ve had lots of fun playing Hot Shots and it was pretty exciting to win the prize. Getting to see everything at the Australian Open was amazing.

“It was a bit scary making a speech at the function but my mum said I did a good job. And it was really fun to do the
TV interviews.”

MLC Financial Adviser Michael Miller has been along for the ride with Hewatt, initially awarding him with his monthly prize when he was nominated in November last year.

“At MLC, we believe in the power of coaching. I know how much Lachie enjoys working with his coach Owen here in Melba, and to get this special coaching session with Alicia today will really build on that. There’s no doubt that whether it’s planning your finances or hitting the courts, expert coaching will keep you on track to achieve your goals.”

“We are thrilled to support grassroots tennis right across the country and provide exciting opportunities like this to MLC Tennis Hot Shots participants. In January, the lucky monthly nominees will come together to enjoy a money-can’t-buy Australian Open experience, and it is great to see Alicia here again today passing on her wealth of tennis knowledge to Lachie. Who knows, we might see L. Hewatt on Rod Laver Arena in the future.”