Wendy Hudson, president of Port Macquarie's Kendall Tennis Club, hopes everyone in her town will get behind the AO Blitz to score a top player at Australian Open 2014. 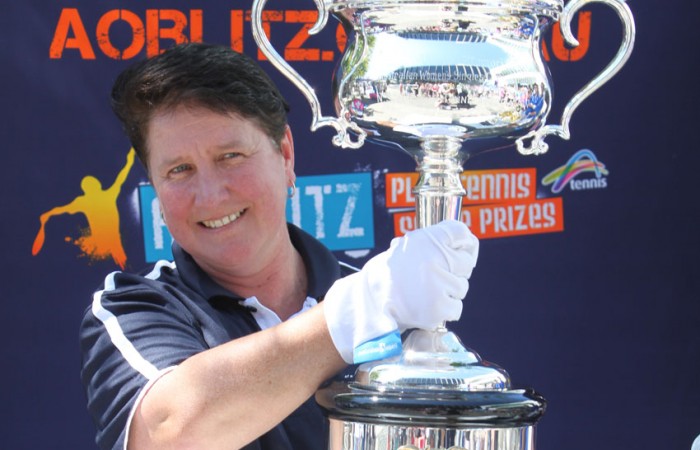 Does your tennis club have a volunteer who works tirelessly and is deserving of some recognition?

The AO Blitz is pleased to be running the ANZ Local Hero Challenge, providing you with the chance to nominate a dedicated volunteer from your tennis community, putting them in the draw to win Australian Open 2014 tickets!

Hudson is the president of the Kendall Tennis Club in Port Macquarie, New South Wales. The club, which has 250 members, won the 2010 Australian Tennis Award for Best Community Club and has also collected several state and local awards.

“I’ve been involved in tennis for over 35 years,” she said. “My parents ran the tennis club before me and my father is a coach.”

She was responsible for starting the club’s junior tennis competition, which has now been successfully running for 20 years.

The Local Hero Challenge is one of many challenges that make up the AO Blitz, with entrants able to earn 200 points for themselves and their towns just by nominating a club hero.

Hudson was part of an AO Blitz activation in Port Macquarie last week, which sparked a lot of excitement among tennis players and fans in the area.

“We need to keep pushing tennis and we’ve got a lot of great tennis players in this area. The AO Blitz may be one way of creating a champion.”

Hudson hopes to see Kendall Tennis Club members earning points for their club and town when the competition officially launches in a week.

“We want to get everyone behind the AO Blitz,” she said. “Our club certainly will be. We want to have one of the top players for our town.”

The 256 towns who earn the most points will be allocated a player to represent them at Australian Open 2014. The towns which get the eventual men’s singles and women’s singles champion will be thrown a community function to celebrate, with the highest individual point winner from the town given a $10,000 ANZ Access Advantage account.

Have you signed up for the AO Blitz yet? Visit www.aoblitz.com.au to register or follow online at facebook.com/AOBlitz and @aoblitz.