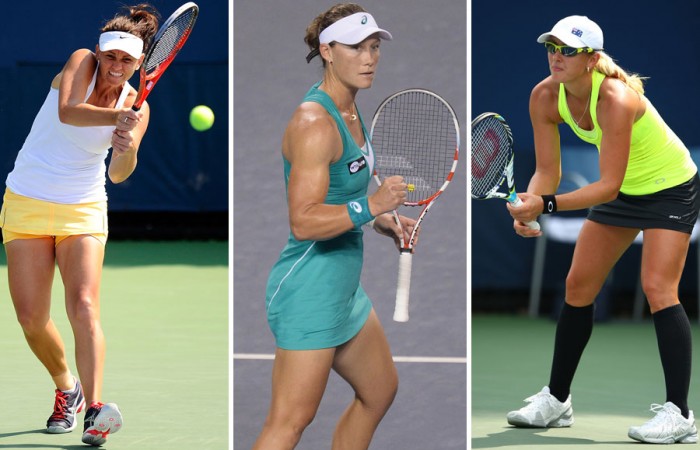 Australians Casey Dellacqua and Anastasia Rodionova have qualified for the WTA Toray Pan Pacific Open in Tokyo, joining compatriot Sam Stosur in the main draw and ensuring a strong Aussie presence in the Japanese capital.

Stosur, the tournament’s 12th seed, began her campaign with a gritty 2-6 6-4 6-1 win over Alize Cornet, and could find herself up against Rodionova should the Melburnian beat local heroine Kimiko Date-Krumm.

Dellacqua was similarly impressive, beating seeds Mandy Minella of Luxembourg and Czech Kristyna Pliskova – both in straight sets – to take her place in the main draw.

There she will face Frenchwoman Kristina Mladenovic in the first round.

Young Aussie Ash Barty came within a whisker of joining her compatriots; the 17-year-old defeated Japanese wildcard Nao Hibino in straight sets to reach the final round of the qualifying event, before falling in a third set tiebreak to world No.73 Maria-Teresa Torro-Flor.

Barty will get a chance to shrug off that disappointment when she teams with Dellacqua in the doubles draw.

The pair are seeded second, having reached the Australian Open, Wimbledon and US Open finals in 2013.

Among our men, Bernard Tomic and Marinko Matosevic will be in action this week at the ATP 250 Thailand Open in Bangkok.

Tomic, the world No.50, has drawn a tough opening round assignment against big-serving Croat Ivo Karlovic.

The winner books a date with fourth seed and last week’s ATP Metz winner Gilles Simon in the second round.

Matosevic, meanwhile, finds himself up against 18-year-old Thai wildcard Wishaya Trongcharoenchaikul, ranked No.978.

A win would see Matosevic face third seed Milos Raonic in round two, a player he defeated recently at the US hardcourt event in Washington DC.