Students at Westside Christian College and Ipswich Grammar School found inspiration in the AO Blitz as it continued its road-trip around Queensland. 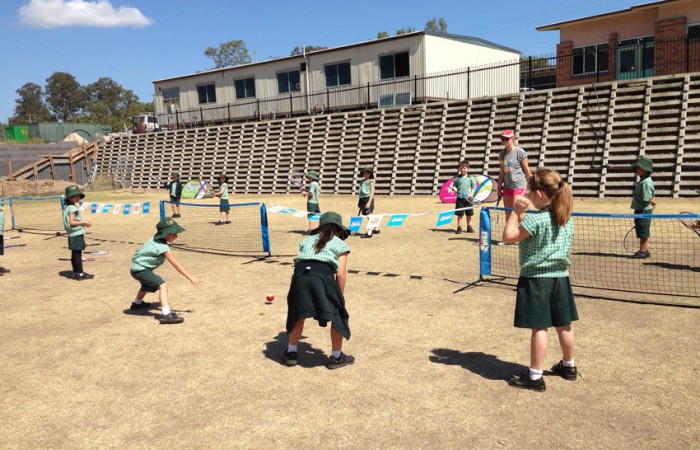 Ipswich is about 40km west of Brisbane along the Bremer River Valley. The city has a population of over 180,000 and is home to one of our brightest young tennis stars, Ashleigh Barty.

On Monday the AO Blitz visited Westside Christian College and Ipswich Grammar School, its first of many school stops from now until the start of Australian Open 2014.

The day started with a school assembly at Westside before students from Prep right through to Year 3 were invited to play some MLC Tennis Hot Shots, test the speed of their serve and get their photo taken with the Australian Open trophies.

At Ipswich Grammar Primary School students were introduced to several AO Blitz challenges while Year 8 and 9 students had their first taste of a Cardio Tennis workshop.

“Our school tennis program at Ipswich Grammar has been going for 11 years now. It’s gone from nothing to the stage now that we field teams in every age group,” says Glinster.

“Ipswich is a community and we’re working together with all the clubs up here to try and get tennis more pro-active. Five years ago the numbers were good and the tennis community in Ipswich was strong but it’s not so at the moment and that’s what we are working on.

“Something like the AO Blitz is big for us because it brings tennis out of the cupboard and gets people looking at it again. It gives kids an incentive to do something around tennis and they can get something back.”

Students were inspired by the presence of “Norm” and “Daphne”, the Australian Open men’s and women’s singles trophies.

“They are so excited, jumping up and down just to get their photo taken with the trophies. I heard comments like ‘Oh I wish I could hold it one day as a player’,” continued Glinster.

“Already you can see it in their eyes that the AO Blitz is something very special to them. In terms of getting prizes I think that just inspires them more to take an interest in tennis which is good.

“What we are going to try and do is work as a team. We have six or seven clubs and if we work together and become an identity like Tennis Ipswich which we intend to do then that will give us a good chance of scoring a top player to represent our city at the Australian Open.“