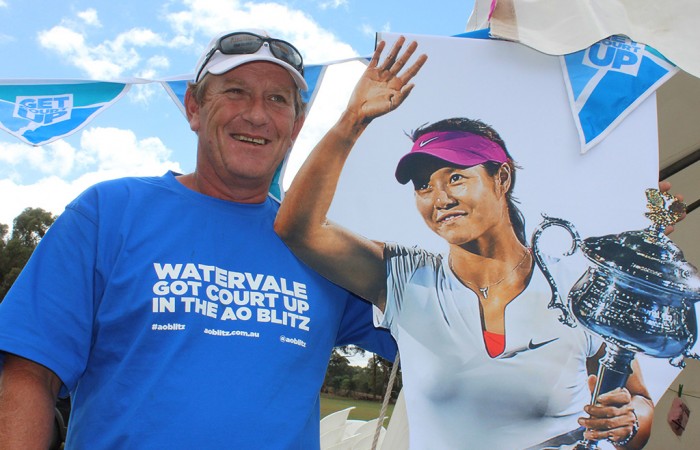 The grand prize – a town party – took place at the Macclesfield Sporting Complex on the club’s six bitumen courts, which also service the netball community.

The following day, the AO Blitz moved on to Watervale, a town in the Clare Valley renowned for its superior Riesling, Cabernet and Shiraz wines.

Watervale is now also acclaimed throughout the state for its determination to win the AO Blitz, having snared Chinese star Li Na whose final victory over Dominika Cibulkova at the Australian Open ensured further riches for the struggling Watervale Tennis Club.

Along with free television sets, a tennis carnival and a $10,000 cheque to the highest individual AO Blitz points scorers from Macclesfield and Echunga, both towns were presented with an additional $10,000 from sponsor ANZ.

For Watervale, the money will go towards resurfacing the club’s three badly damaged courts, estimated to cost $120,000.

Club president David Long said the AO Blitz had galvanized the community, with almost a third of funds raised and an additional $60,000 hoped for in grants.

“It’s our responsibility to make sure our kids have as good a facility as possible,” Long said of the tennis courts, which currently service 40 members.

“That’s what we are all about, getting little kids involved in tennis.”

Macclesfield is aiming to raise a similar amount to rebuild the clubhouse over the next two-four years.

The AO Blitz is the biggest participation campaign ever run by Tennis Australia and as part of the competition more than 900 communities Australia-wide took on a series of tennis challenges in the hope of being represented by an international tennis player at the Australian Open.

Watervale entered as a tennis club, but also involved the local primary school in generating as points for the town.

“The AO Blitz is a fantastic competition but we never dreamed of winning it,” said Long, who ensured every bit of progress made by the town was shared on social media.

“Every time I’d go to Facebook I’d think, ‘wowee, what have we done.’

“These communities survive because people are hands on,” Fitzgerald said.