More than 100 budding players and their families attended the AO Blitz's visit to Toowoomba, which featured a visit from tennis stars Luke Saville and Lizette Cabrera. 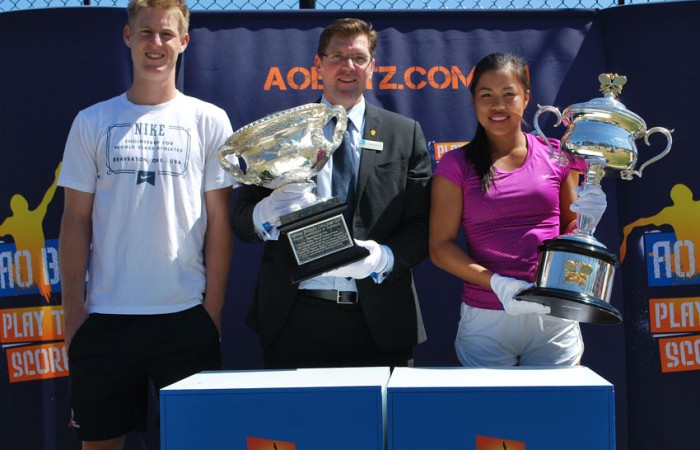 Toowoomba is known as the Garden City of Australia, the largest inland non-capital city in the country and the number one family-friendly city in Queensland. It is home to the famous Weis ice cream bar and Australia’s favourite sponge cake, the Lamington. It’s so passionate about its sponge cake the city even holds the Guinness World Record for the largest Lamington at 2,361 kg.

With a population of 140,000, Toowoomba was the third stop on the AO Blitz’s road trip around Australia.

Over 100 young budding tennis players and their families visited Toowoomba Regional Tennis Centre on Saturday to get a taste of what the AO Blitz had to offer.

Locals tried their luck with the ‘Rally Monster’, ‘Juggler’ and ‘Target Practice’ challenges before experiencing a Cardio Tennis workshop.

We found Kenneth Barter, who was competing in the qualifying round of the Toowoomba Pro Tour event was Toowoomba’s fastest server, clocking a 163km/h serve while a local man named Geoff followed closely behind him with at 137km/h serve.

“Tennis is played right across our region and for some of our townships the tennis court has proven to be their social hub for over a century,” says Cr Geoff McDonald, Environment and Community chair at Toowoomba Regional Council.

McDonald welcomed the AO Blitz to town and is confident that Toowoomba can be one of the top towns on the AO Blitz leader board.

“It’s a great initiative by Tennis Australia. We’re putting the challenge out to all the other towns and cities right across the nation. Toowoomba will be the number one tennis town in Australia ready for the Australian Open in 2014 on 13 January.

“An awareness of the many associated activities with tennis I hope will increase the participation numbers of people enjoying and playing tennis across the region.

“We would welcome and support any of the top players to represent Toowoomba, no doubt the great “Fed Express” on the international stage would be fantastic.”