In the latest ATP and WTA rankings, Ash Barty has become the No.2-ranked Aussie female while Nick Kyrgios is now the youngest man inside the top 200. 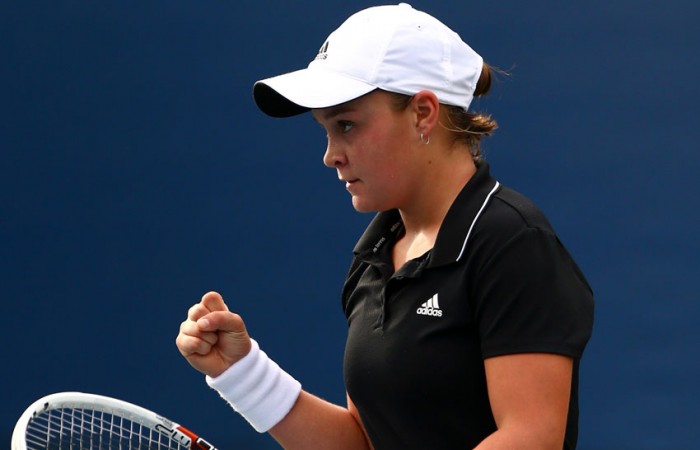 In a great week for the Australians in the latest ATP and WTA rankings, Ash Barty, Lleyton Hewitt and Nick Kyrgios have all enjoyed significant rises following excellent performances at the US Open.

Barty has become Australia’s second-ranked female after jumping 32 places to a new career-high mark of world No.137.

The 17-year-old reached the second round at Flushing Meadows thanks to her defeat of Spaniard Estrella Cabeza Candela, eventually falling to 32nd seed Anastasia Pavlyuchenkova in the last 64.

And despite her age-restricted playing schedule, Barty, incredibly, is up to a doubles ranking of No.12 (from 17th) following her run to the US Open final with compatriot Casey Dellacqua.

Dellacqua is ranked 11th on the WTA doubles chart, up from No.15.

Sam Stosur remains Australia’s top-ranked player, despite falling seven places to No.18 after her shock first-round exit in New York.

On the men’s side, Kyrgios has become the youngest member of the world’s top 200 after rising 26 places to No.186, a career-high ranking for the 18-year-old.

Kyrgios is the only teenager inside the entire top 200.

The Canberra native won three matches to qualify for the US Open main draw, before pushing fourth seed David Ferrer in a tough three-set loss.

At the opposite end of the age spectrum, 32-year-old Hewitt jumped eight places to No.58 following his fourth-round showing at Flushing Meadows.

It puts Hewitt within striking distance of reclaiming the Australian No.1 ranking; currently Bernard Tomic and Marinko Matosevic sit above him at No.51 and No.55 respectively.

Also included in the latest rankings were ITF Futures event results from prior to the US Open.

John-Patrick Smith was a beneficiary of this, with the points from his win at Winnipeg, Canada added and helping him jump 32 places to No.272.

In juniors, Thanasi Kokkinakis vaulted 42 places to world No.13 after reaching the US Open boys’ singles final.

His conqueror in the final, Borna Coric of Croatia, has risen to No.1.