Barty and Dellacqua go down in three 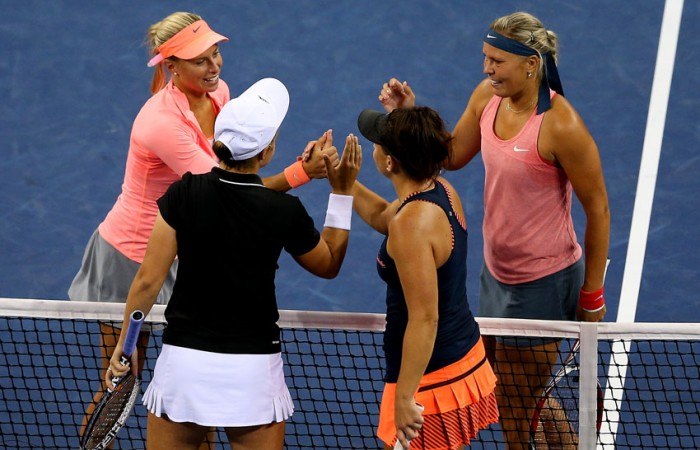 Ash Barty and Casey Dellacqua have been defeated in three tough sets by Czechs Andrea Hlavackova and Lucie Hradecka in the US Open women’s doubles final on Saturday night.

The Australians won the first set before ultimately being outdone by the more powerful Czech combination, falling 6-7(4) 6-1 6-4 in just under two hours.

It was Barty and Dellacqua’s third Grand Slam final of 2013 after going down in the Australian and Wimbledon deciders.

Meanwhile, it completed a successful fortnight for the fifth seeds; Hlavackova won the title to go with her 2013 mixed crown at Flushing Meadows, and the pair erased the memory of falling in last year’s final to Italians Sara Errani and Roberta Vinci.

The Czechs has defeated 13-time major doubles winners Venus and Serena Williams in the semifinals.

Speaking at the presentation ceremony on Arthur Ashe Stadium, Dellacqua said her flourishing partnership with Barty was the result of “having fun with a friend”.

“We just enjoy playing together and think that’s why we’ve had a lot of success. Not today again, but we’ll get one one day, and it will feel good,” she said.

Initially, it looked as if the Aussie duo were poised to capture their first Grand Slam doubles crown.

The made the early running, and despite not being able to capitalise on a 5-4 lead in the opening set, eventually won a tense affair in a tiebreak. When they went immediately up a break in the second set, they had established a commanding position.

But the Czechs responded with vigour, adding consistency to their powerful barrages and forcing plenty of errors from Barty and Dellacqua’s racquets.

They roared through six straight games to level the match.

The third set was another cliffhanger, with Hlavackova and Hradecka taking important strides with a break for a 4-3 lead. Yet the couldn’t hang on – nervy serving from Hradecka coupled with strong returning from the Australians saw scores level at 4-4.

Barty and Dellacqua will rue their missed opportunities in the ninth game, which saw them gain a game point on serve. But unable to put away their shots, the Czech’s pounced, and served out the match in the very next game to love.