Thanasi Kokkinakis has recorded a come-from-behind upset victory over No.2 seed Gianluigi Quinzi to progress to the boys' singles semifinals at the US Open. 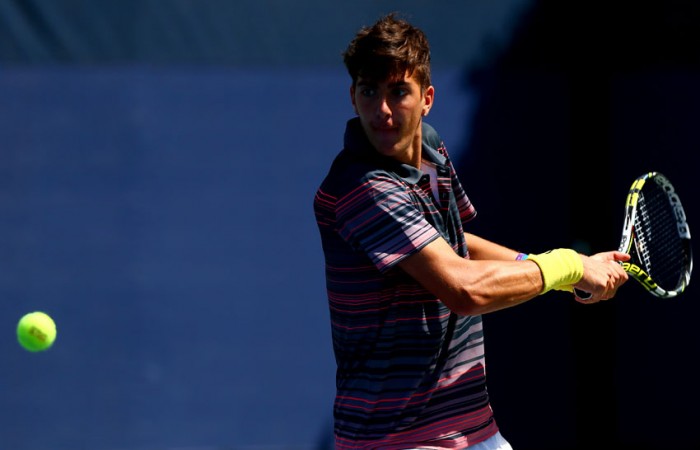 Australia’s Thanasi Kokkinakis has recorded a come-from-behind upset victory over No.2 seed Gianluigi Quinzi to progress to the semifinals of the boys’ singles event at the US Open.

Dominating on serve, Kokkinakis won 80 per cent of points behind his first delivery compared to just 52 per cent for his Italian opponent, the reigning junior Wimbledon champion.

Despite going into the match as the underdog, the South Australian no doubt benefited from combining with Quinzi in the boys’ doubles event, giving him a strong knowledge of his opponent’s game.

Kokkinakis spoiled the progression of the top four seeds through to the boys’ singles semifinals at Flushing Meadows; in the other semifinal, top seed Alexander Zverev of Germany will take on No.4 seed Borna Coric of Croatia.

Not that the young Aussie is out of place at this stage of a junior Grand Slam tournament.

In January, he progressed all the way through to the Australian Open final before falling to compatriot Nick Kyrgios.

And thanks to a similar run in New York, Kokkinakis is beginning to make people sit up and take notice.

“I’ve seen some parts of @TKokkinakis play in juniors today at the US Open. Really like his game. Good future pro to watch,” tweeted Patrick Mouratoglou, esteemed coach of Serena Williams.

Kokkinakis will face Garin in the semifinals in the third match on Court 7 on Saturday as part of the Day 13 schedule.