UPDATE: Ash Barty and Casey Dellacqua have reached their third Slam final of 2013 with a commanding win in the US Open semifinals on Thursday in New York. 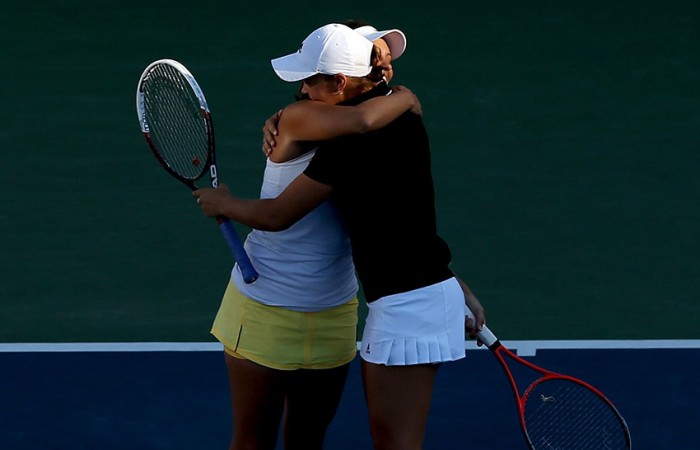 Ash Barty and Casey Dellacqua will contest their third Grand Slam final of the year, having won through to the decider of the US Open women’s doubles with a 6-2 6-2 win over India’s Sania Mirza and China’s Zheng Jie.

The Australian pairing were on top for most of their semifinal on Thursday and will now meet the winner of a clash between the Czech team of Andrea Hlavackova and Lucie Hradecka and the unseeded Williams sisters Serena and Venus.

Barty and Dellacqua are yet to drop a set at the US Open, continuing a stellar run at what is just their fifth event together.

> sitting down with Casey and Ash

Their dominance has come despite a major challenge in the form of Barty’s age.

Barty reached the women’s doubles final of the Australian Open at age 16 earlier this year, but had to return to Melbourne after contesting the Wimbledon final because of the WTA’s age restriction rules for under-18 players.

The US Open is the 17-year-old’s first event since losing the Wimbledon doubles final, which came two years after she collected the girls’ singles title at the All England Club.

“It’s difficult when we’ve only played five tournaments together the whole year and the other girls have played 13 or 14 events,” Barty said earlier this week.

“I think it’s pretty positive that we’re still in with a shot when we’ve only played less than than half the events that the other girls have.

“It was a bit of a surprise to make the Australian Open final, but we realised afterwards that we could make a real impact on the WTA Tour.”

Despite the limited time together, the duo could be among the top-four teams invited to the season-ending WTA Championships in Istanbul.

Dellacqua suggested on the eve of their semifinal win that the pair’s friendship had a lot to do with their success.

“I’ve played with numerous players where you feel like you can’t miss a ball because they’re going to get so angry with you,” she said.

“It’s the worst feeling as a player.

“I never feel pressure from Ash if I miss a shot. We get along so well, so I think that definitely helps us.”

The 28-year-old said facing the Williams sisters in the tournament decider “would be the ultimate”.

“I’ve played them a few times before. But to play them here in America, on Arthur Ashe in the final, it would be amazing,” Dellacqua said.