Barty and Dellacqua into US Open semis

UPDATE: Ash Barty and Casey Dellacqua are through to the semifinals of the US Open doubles in New York, while Thanasi Kokkinakis enjoyed junior success. 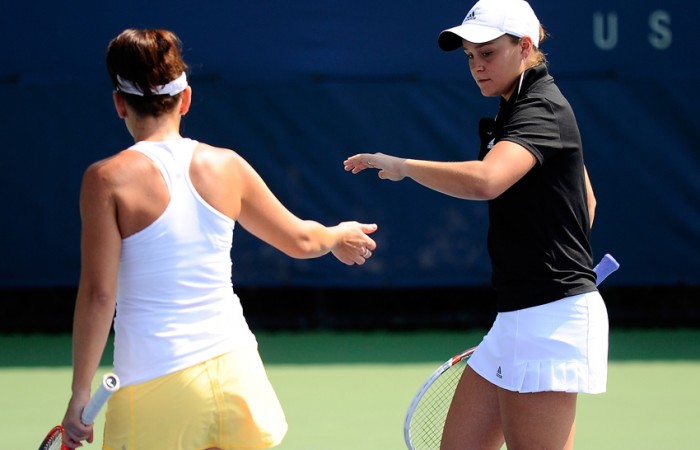 Australian Grand Slam hopefuls Ash Barty and Casey Dellacqua are through to the semifinals of the US Open women’s doubles in New York.

Barty and Dellacqua powered past Russian second seed Ekaterina Makarova and Elena Vesnina 6-2 6-3 on Wednesday to move into the last four.

The Aussie double act are looking to go one better than losing finals showings at the Australian Open and Wimbledon.

Barty and Dellacqua are yet to drop a set at Flushing Meadows this year, having also beaten No.9 seeds Liezel Huber and Nuria Llagostera-Vives in the third round.

They will next take on 10th seeds Sania Mirza and Zheng Jie; the Indian-Chinese pairing overcame Wimbledon champions Su-Wei Hsieh and peng Shuai in straight sets in the quarterfinals.

The Aussie duo are currently sixth in the points race to the WTA season-ending championships in Istanbul, and with their US Open run, will likely vault higher to be in a position to claim a prized top-four position.

It was also a good day for Australia in the junior events at Flushing Meadows, with Thanasi Kokkinakis winning both his singles and doubles matches on Wednesday.

The South Australian brushed aside Chilean 11th seed Nicolas Jarry 6-3 6-2, before returning to Court 13 to combine with Italy’s Gianluigi Quinzi in doubles.

Kokkinakis will next take on Lucas Miedler of Austria in third round singles action; a potential quarterfinal with the second-seeded Quinzi looms.