UPDATE 3pm: Lleyton Hewitt overcame a strong challenge from Brian Baker to reach the second round at the US Open, while James Duckworth fell in four sets. 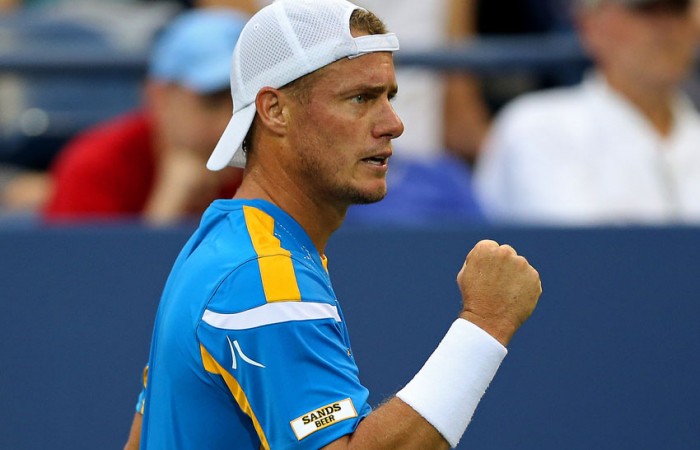 Veteran Lleyton Hewitt has set up a second-round showdown with fellow former champion Juan Martin del Potro at the US Open in New York.

Playing his 13th and possibly last US Open, 32-year-old Hewitt downed American Brian Baker 6-3 4-6 6-3 6-4 in his stop-start and court-shifted opener on Wednesday to join countryman Bernard Tomic in the second round at Flushing Meadows.

Hewitt and Tomic, who plays British qualifier Daniel Evans on Thursday, are the only Australians left in the singles draws after young wildcards Ashleigh Barty and James Duckworth both lost on Wednesday.

Returning to his most successful grand slam venue, the 66th-ranked Hewitt improved his impressive record at Flushing Meadows to 44-11 with a gritty win over the 186th-ranked Baker.

But it wasn’t easy, with Hewitt forced to overcome a series of distractions to progress.

With rain upsetting the schedule, Hewitt’s match was moved from Louis Armstrong Stadium to The Grandstand Court and didn’t finish until just before 10pm local time.

“I hope the kids are in bed and I don’t have to do that tonight,” Hewitt said.

“It was hard for Brian and I. Thought we were on Louis Armstrong and ended up on Grandstand.”

The 2001 champion dropped serve in the opening game of the match, but broke the American twice and clinched the first set with an ace.

Hewitt again fell behind in the second but fought back after a rain delay, only to drop serve again to allow Baker to put the match back on level terms.

Hewitt jumped to a 3-0 lead in the third, then dropped serve before breaking the American again and holding on to claim a two-sets-to-one advantage.

Hewitt had to save a break point in the opening game of the fourth set, but was rewarded when Baker, feeling the tension, double-faulted to hand the Australian what appeared a decisive break in the fourth game for a 3-1 lead.

But after receiving a time violation, then asking the umpire to tell the crowd to cease flashing their cameras, a seemingly rattled Hewitt twice faltered to hand back service breaks to Baker.

But the former world No.1 finally triumphed when Baker double-faulted for a 10th time on match point after three hours and six minutes.

“This is why I still play in the game, to be in events like this – Davis Cup and Grand Slams,” Hewitt said.

Del Potro, the 2009 champion and sixth seed this year, had an even tougher first-round stoush with Spaniard Guillermo Garcia-Lopez.

Garcia-Lopez looked set to take the match to a deciding set when he led 4-1 in the fourth.

Hewitt and del Potro are 2-2 head-to-head but the Argentine has won both their hardcourt encounters.

Earlier on Wednesday, Duckworth went down in four sets to fellow wildcard Tim Smyczek in the first round of the US Open.