Kyrgios pumped for US Open

Feeling like he belongs, Australian teenager Nick Kyrgios is undaunted by the challenge of facing No.4 seed David Ferrer in his main-draw debut at the US Open. 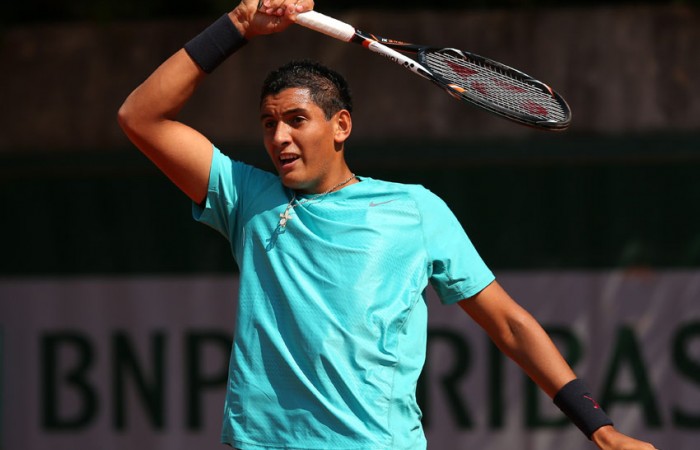 Feeling like he belongs, Australian teenager Nick Kyrgios is undaunted by the challenge of facing French Open finalist David Ferrer in his main-draw debut at the US Open.

The youngest player in the 128-man draw, 18-year-old Kyrgios earned a show-court crack at the world No.4 on Monday night (Tuesday AEST) after successfully qualifying for the New York major.

“He is one of the best opponents in the world and I think I’ve got a lot of confidence and I’m just going to go out there and play my game and see how it goes,” Kyrgios said.

The reigning Australian Open junior champion, Kyrgios came of age in the senior ranks with a shock first-round win over Czech veteran Radek Stepanek at the French Open.

But the world No.215 ranked his fighting 4-6 6-4 6-3 victory over unheralded Tunisian Malek Jaziri in the final round of qualifying at Flushing Meadows as just as significant.

“When I finally got that match point yesterday, it was a good feeling,” Kyrgios said.

“I just dropped my racquet and it maybe equalled the feeling of winning the first round at the French Open.”

The world’s top-ranked junior, Kyrgios was awarded a wildcard at Roland Garros and said earning his own way into a Grand Slam for the first time was also special for proving he has the goods to compete with the big boys.

“Confidence-wise, being in the locker-room, you sort of think that you really belong, and you know you’ve really earned your place in the main draw,” he said.

Kyrgios’s clash with fourth-seeded Ferrer is the feature night match on Louis Armstrong Stadium and the young Aussie is relishing another appearance on a big stage.

“I definitely like the spotlight a bit more than playing on a back court in a tournament,” he said.

“Every time I’ve had an appearance in the main draw of a Grand Slam I’ve done pretty well, and I’ve played well, and I’ve competed to the last ball so I’m looking forward to it.”