UPDATE 12:55pm: Nick Kyrgios, Casey Dellacqua, Olivia Rogowska and Anastasia Rodionova have all progressed to the final round of US Open qualifying. 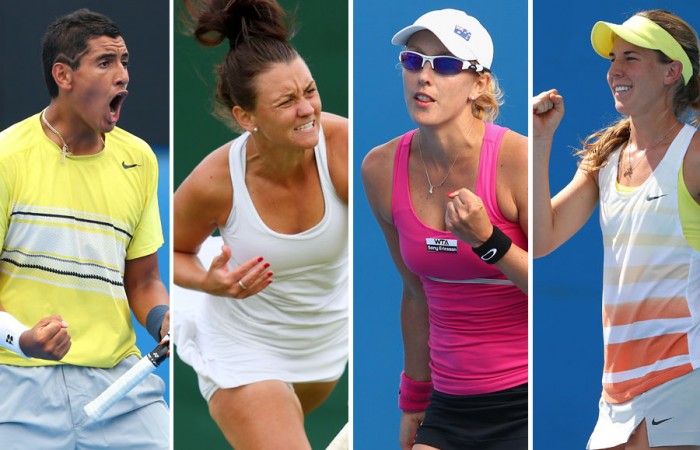 In a fantastic day for the Aussie contingent at Flushing Meadows, Nick Kyrgios, Casey Dellacqua, Olivia Rogowska and Anastasia Rodionova have moved into the final round of US Open qualifying with victories on Thursday.

Kyrgios endured a mammoth battle against ninth seed Joao Souza of Brazil, letting a second-set lead and four match points slip before recovering in the third to win 6-3 6-7(8) 6-4.

It was an impressive mental effort from the inexperienced 18-year-old to hit the re-set button after several opportunities went begging late in the second set; he will next take on Tunisia’s Malek Jaziri.

Earlier on Thursday, Dellacqua trounced France’s Claire Feuerstein 6-2 6-1, winning the second set in just 19 minutes and setting up a showdown with Ksenia Pervak of Russia.

Shortly after, Rogowska recovered from a set down to oust Dutchwoman Richel Hogenkamp, securing a 4-6 6-3 6-4 victory in one hour and 38 minutes.

The Victorian next faces Maria Joao Koehler, the 18th seed who, like Rogowska, came back from a set down in her second round match to reach the final stage of qualifying.

In one of the later matches of the day at Flushing Meadows, Anastasia Rodionova cantered to victory over Japan’s Mayo Hibi.

The Aussie quartet each require just one more win to send them into the US Open main draw, beginning Monday 26 August.

All will be in action on Friday at Flushing Meadows on Friday (US Eastern time).

In the opening match of the day on Louis Armstrong Stadium, New South Welshman Matt Reid was eliminated from the men’s qualifying competition, falling 6-4 6-4 to Argentina’s Maximo Gonzalez.