Rankings watch: several Aussies on the up

Rankings rises for Sam Stosur, Marinko Matosevic, James Duckworth and Sam Groth have capped an impressive week for Aussies in the US hardcourt season. 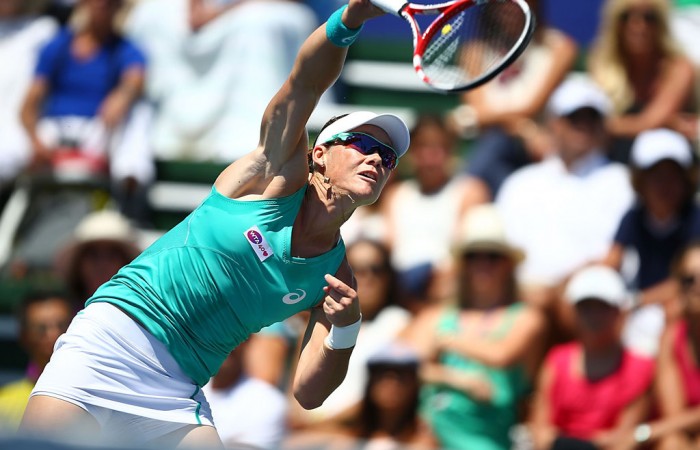 Rankings rises for Sam Stosur, Marinko Matosevic, James Duckworth and Sam Groth have capped an impressive week for Aussies in the US hardcourt season.

Stosur jumped from No.13 to No.11 following her victory at the WTA Southern California Open in Carlsbad, a triumph that saw her return to within a few hundred points of the top 10  – Caroline Wozniacki currently sits 350 points clear at 10th.

Stosur does not have a vast number of points to defend at upcoming US Open Series events in Toronto (third round in 2012) and Cincinnati (2012 quarterfinals), meaning she could improve further upon her ranking – and potential seeding – ahead of the US Open in three weeks.

Also enjoying rises were Matosevic, Duckworth and Groth, whose solid results in Washington DC saw them all vault up the ATP ladder.

Matosevic’s run to the quarterfinals at the ATP 500 event – where he beat James Blake, Nikolay Davydenko and Milos Raonic – saw him jump nine places to world No.74.

The result helped arrest an alarming slide during which the Victorian dropped from No.39 (in late February) to No.83 going into the Washington DC event.

Duckworth’s win in the opening round in Washington over Japan’s Yuichi Sugita pushed the 21-year-old up six spots to a career-high ranking of No.153.

Duckworth sits just one ATP ranking position behind compatriot John Millman, who is the fifth-ranked Aussie.

Groth, meanwhile, vaulted an impressive 31 rungs after qualifying for and then winning a round in Washington.

The big-serving Victorian defeated India’s Sanam Singh and American Rhyne Williams in qualifying before beating another American, Denis Kudla, in the first round of the main draw.

Groth now sits at world No.197, just his fifth ever week inside the top 200 and eight places off his career high of No.189 set back in March.

In wheelchair tennis, Aussie Adam Kellerman’s excellent form has seen him rise to a career-high ITF ranking of No.18, joining compatriot Ben Weekes (No.15) in the top 20.

Those semifinals came at the Belgian and Salzburg Opens, helping the 23-year-old peak at a career-high ranking.

It also comes shortly after his double gold medal-winning effort at the 19th Maccabiah Games, a prestigious sporting event in Israel for Jewish competitors.