UPDATE 2:40pm: Australians Bernard Tomic, Marinko Matosevic and James Duckworth were all winners on Tuesday at the ATP Citi Open in Washington DC. 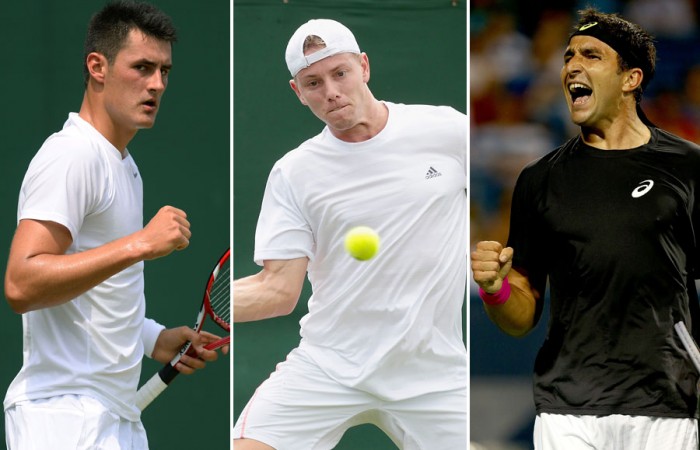 Bernard Tomic, Marinko Matosevic and James Duckworth have all scored wins on Tuesday at the Citi Open in Washington DC in what was a successful day for the Aussies at the ATP 500 event.

Unfortunately, compatriots Lleyton Hewitt and Sam Groth were unable to join them in the second round.

As the 14th seed, Tomic was given a bye into the second round and got his campaign off to a bright start, brushing aside talented Belgian David Goffin in straight sets.

Tomic, who this week returned to the top 40, smacked seven aces and saved all six break points he faced in what was an impressive serving display, winning 6-1 6-3 in one hour and five minutes.

“I played not so bad,” Tomic said.

“Very tough conditions. Very difficult to play 100 per cent on these courts because it’s so hot and so humid.”

The 20-year-old next faces the winner of the match between Ryan Harrison and top seed Juan Martin del Potro.

Harrison set up the battle with the seventh-ranked Argentine following a 6-3 7-5 victory over Hewitt, who was unable to build on the form that carried him to the semifinals at last week’s BB&T Atlanta Open.

Later on Tuesday in the US capital, Marinko Matosevic continued his exciting run, upsetting No.15 seed Nikolay Davydenko 6-4 7-5.

A day after ousting former world No.4 James Blake in straight sets, the Victorian proved too strong for the Russian – once ranked as high as No.3 – during his one hour and 27 minute victory.

In the third round, Matosevic will take on fourth seed Milos Raonic, who eliminated Aussie qualifier Groth 7-5 6-4.

James Duckworth joined Tomic and Matosevic as a winner on Tuesday, triumphing in his first round match over qualifier Yuichi Sugita.

The 6-2 6-2 victory saw the Aussie wildcard set up a second round meeting with in-form No.7 seed Kevin Anderson.