With an eerily similar draw, Bernard Tomic is drawing on memories of his 2011 Wimbledon quarterfinal run as he targets more success at the All England Club. 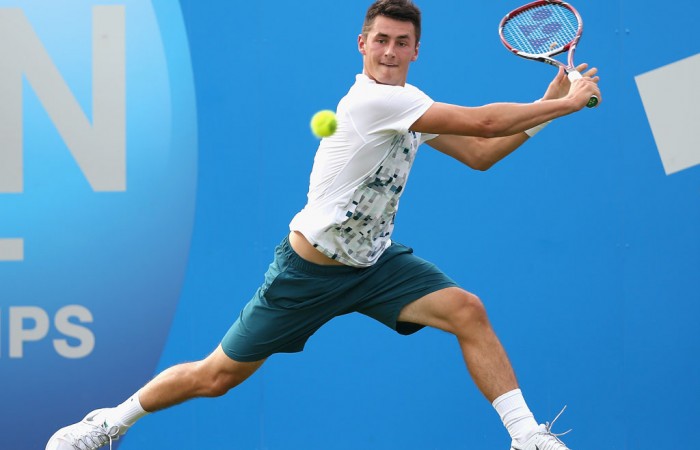 With an eerily similar draw, Bernard Tomic is drawing on memories of his run to the 2011 Wimbledon quarterfinals as he targets another surprise showing at the All England Club.

Tomic looked to have left his injury woes and off-court dramas behind him in an encouraging performance at the lead-up event in Eastbourne.

Posting back-to-back wins for the first time since February has raised hopes the world No.64 can let his tennis do the talking again.

Tomic’s greatest achievement to date is reaching the last eight at Wimbledon in 2011 as an 18-year-old qualifier, before going down to eventual champion Novak Djokovic.

He’s received a tough draw for this year’s event, starting on Monday, but one not dissimilar to that he faced two years ago.

Just as he met a seeded player in the first round in 2011 in Nikolay Davydenko, Tomic will have to overcome big-serving American Sam Querrey, the 21st seed on Tuesday.

He’ll then likely need to topple top-10 seeds Richard Gasquet (ninth) and Tomas Berdych (seventh) in the ensuing rounds, as he did in upsetting fifth seed Robin Soderling two years ago.

And again, world No.1 Djokovic would await him in the quarterfinals, should he get there.

After winning his maiden title at the ATP event in Sydney in January, Tomic has endured a lean stretch, but all is forgotten when he thinks back to the magical run in 2011.

“It’s an amazing feeling when I look back to that tournament,” Tomic said.

“If I can relax and my leg holds up well and I have fun and play good tennis, I think I can do very well.

“You’ve just got to get through those first few rounds and that determines how well you’re feeling, how we’ll you’re playing, and I’ve got a bit of confidence now so hopefully I can use it.”

Tomic is still battling a hamstring injury suffered during a first-round French Open loss, but he’s confident the problem won’t threaten his campaign.