Roger Federer and Rafael Nadal have been scheduled to meet in a blockbuster quarterfinal following Wimbledon's official draw at the All England Club on Friday. 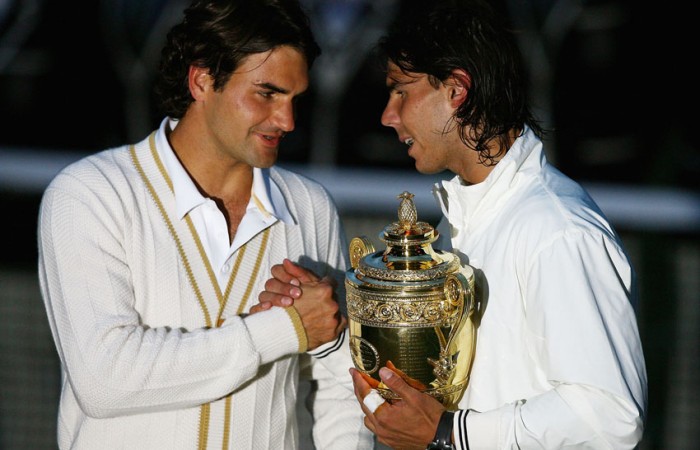 Seven-time champion Roger Federer and dual winner Rafael Nadal were lined up as potential Wimbledon quarterfinal opponents when the draw for the season’s third grand slam was made Friday.

The draw was good news for world No.1 Novak Djokovic, the 2011 champion, after second-seeded Andy Murray was also placed in the same half of the draw as Federer and Nadal.

That would leave Djokovic free of facing any of his major rivals until the final.

Third seed Federer and Nadal, who have met 30 times, were placed in the same quarter of the draw after the Spaniard was only seeded No.5 having lost in the second round in 2012.

If the seedings played out, Djokovic would tackle Tomas Berdych in the quarterfinals, fourth seed David Ferrer would meet Juan Martin del Potro, Nadal would face Federer while Jo-Wilfried Tsonga would go up against Murray.

> see how the Aussies fared in the Wimbledon singles draws

On the women’s side, Serena Williams, who captured her 16th major at the French Open earlier this month, starts on Tuesday against Luxembourg’s Mandy Minella.

Poland’s Agnieszka Radwanska, beaten by Williams in the 2012 final, is also in the same half of the draw as the No.4 seed.

Second-seeded Victoria Azarenka and Maria Sharapova, the third seed and 2004 champion, are projected to meet in the semifinals in the bottom half of the draw.

If the seedings hold through to the quarterfinals, Williams would face seventh-seeded Angelique Kerber, Radwanska would take on Li Na (seeded sixth), Sharapova would meet fifth seed Sara Errani and Azarenka would battle 2011 champion Petra Kvitova, the No.8 seed.

Djokovic starts his campaign against Germany’s Florian Mayer while Murray, the runner-up to Federer in 2012, starts against another German, Benjamin Becker, whom he beat in the quarterfinals at Queen’s last week.

Nadal, the champion in 2008 and 2010 but whose second-round loss to Lukas Rosol last year put him on the sidelines for seven months, is fresh from his record eighth French Open win.

He begins against Belgium’s Steve Darcis.