Bernard Tomic, Sam Groth and Casey Dellacqua have gone down at Wimbledon lead-in events in England, while Lleyton Hewitt's match at Queen's was postponed. 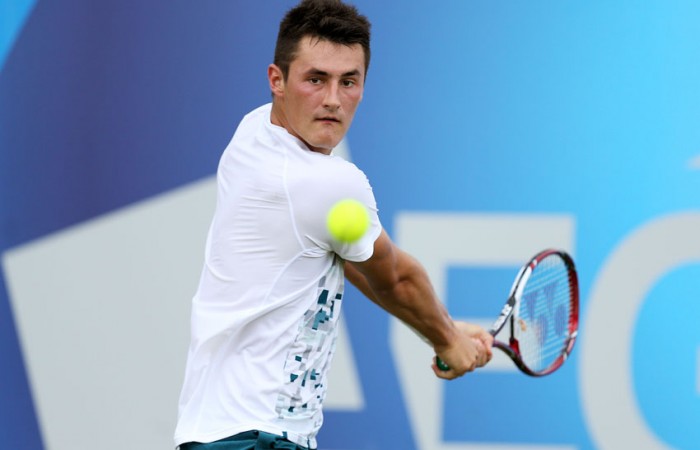 Bernard Tomic has fallen in the opening round of the ATP Queen’s Club event 6-4 6-7(4) 7-6(4) to German Benjamin Becker on Tuesday.

Australian compatriot Sam Groth, a qualifier into the draw of the Wimbledon tune-up, lost 6-7(7) 6-3 6-2 to Czech 12th seed Lukas Rosol, while Hewitt’s second-round clash with Bulgarian 10th seed Grigor Dimitrov was postponed until Wednesday due to the rain.

Tomic said he had only been able to recommence full training late last week due to a hamstring problem that forced him to retire during the first round at Roland Garros.

However he he did not feel the effects of the injury and considered it a strong hit-out to start the grasscourt season.

There were only three breaks of serve in a high-quality match with 105th-ranked Becker capitalising on a handful of Tomic mistakes in the deciding tiebreak.

Tomic is scheduled to team with Hewitt in doubles at Queen’s this week before turning his attention to the event at Eastbourne next week.

Groth, despite serving a whopping 22 aces, was unable to take advantage with his return game in his loss to Rosol.

The Victorian held four break points during the match but was unable to convert any, while his Czech opponent broke three times en route to victory in 90 minutes.

A few hours north in at the WTA event in Birmingham, Casey Dellacqua fell in her first round match to Slovak Daniela Hantuchova.

Dellacqua, who qualified for the main draw at the Edgbaston Priory Club, went down 6-1 7-6(1) in one hour and 24 minutes.

Hantuchova, a former world No.5, next faces emerging Brit Laura Robson in the second round.