Serena Williams' victory over Maria Sharapova in Saturday's French Open final has made her the tournament's oldest female champion in the Open Era. 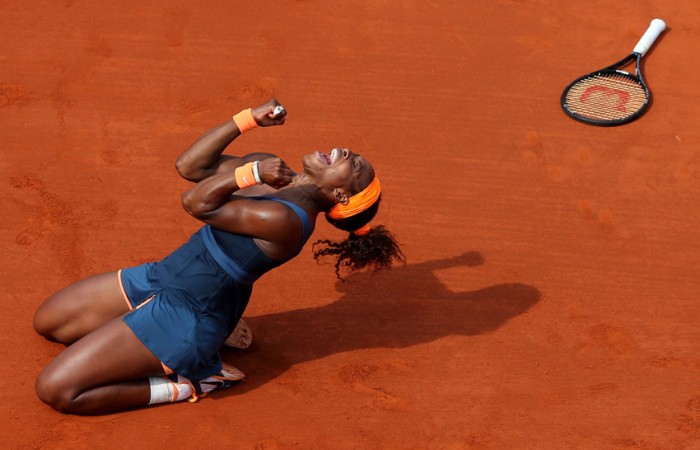 It was the 31-year-old American’s 16th Grand Slam title win, taking her to within two of Chris Evert and Martina Navratilova who are tied for fourth on the all-time list.

And it underscored her near total domination of the women’s game, having won three of the last four major titles — at Wimbledon, the US and French Opens — and reaching the quarterfinals at the Australian Open.

For Sharapova it was a 13th straight loss to her American nemesis dating back to 2004 when she defeated her in the Wimbledon final and the WTA Championships when she was just 17 years old.

“It was very difficult today. After 11 years (since last win) and now I have 16 (Grand Slam titles),” said Williams, addressing the crowd in French.

“But I want to come back next year because I adore Paris and I adore the public here. I want to win here again. I spend a lot of time here (In Paris) … and I think I am becoming a Parisienne.”

Sharapova said: “I played a great tournament, but ran into a really tough opponent today. She has been playing so well this year and the whole of last year as well.

“But this court has brought me so many nice memories. Last year was so incredible to win and to be back as one of the last two players was great.”

In what was the first French Open women’s final involving the two top seeds since 1995, the two biggest names and biggest earners in women’s sport were pitted against each other for the 16th time, the third in a Grand Slam final.

Williams was the strong favourite, having won 13 times for two defeats against the Russian and storming into the final for the loss of just one set, taking her career-best winning streak to 31.

Sharapova though was on a 13-match win run at Roland Garros, having finally come to terms with the demands of claycourt tennis last year when she defeated Sara Errani in the final.

Williams opened up with a sequence of brutal service returns that had Sharapova scampering from side to side and within minutes 0-40 down.

But the tall Russian served her way out of trouble and then showed her aggressive intentions by breaking Williams in the next game.

Sharapova had two points for a 3-0 lead, but Williams started to find her range again to break back and was soon on level terms at 2-2.

She broke again to lead 3-2 and suddenly she looked in command of a match that had started so brightly for Sharapova.

The crowd tried to lift the title-holder, who was seeking her fifth major crown and second at Roland Garros, and she did manage to get back on level terms briefly at 4-4 with Williams bothered by the gusting wind.

But the American produced her best tennis of the match in the next game with some big hits down both flanks and then held serve to take the first set in 51 minutes.

The task on hand for Sharapova was huge, illustrated by the fact that in Grand Slam tennis, after taking a one set to love lead 208 times, the American had failed to complete the job just five times.

Sharapova saved five break points to start the second set, but two games later she struggled again on serve and this time Williams converted her first break point to put herself in the clear at 4-2.

She then comfortably served out twice, with three aces to conclude with, to gleefully banish 11 years of frustrations at Roland Garros.

At 31 years, 247 days she is the oldest women in the Open Era to win the French Open title, taking over from Chris Evert who set the previous mark in 1986.