Bernard Tomic retired hurt while trailing by two sets to Romanian Victor Hanescu at the French Open in his first competitive match since the Madrid Masters. 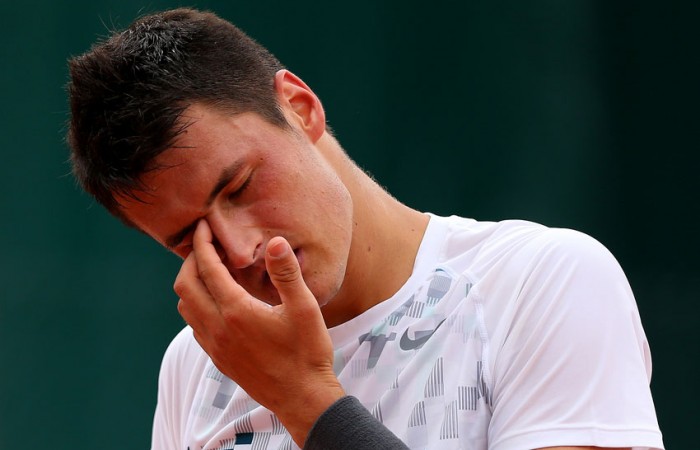 Bernard Tomic retired hurt while trailing by two sets to Romanian Victor Hanescu at the French Open in his first competitive match since the Madrid Masters.

Tomic had appeared troubled by a right hamstring injury for most of the first-round match, but was still battling hard in a tight tussle with 54th-ranked Hanescu.

It brought a premature end to his return to the court after a dramatic month, yet Tomic said he’d been able to focus in the lead-up to Roland Garros.

“I’m the type of guy where I can sort of let these things sort of go. I was feeling fine,” he said.

“I mean, the last two weeks I was training well, playing well, didn’t think a lot about it, was not worried. To be honest, I didn’t think about it the last sort of week.

“But then that happened in the match today, and it just, you know, it’s unlucky.”

The start of the match was delayed by more than two hours due to rain but Tomic looked relaxed when he arrived for the match.

However, he looked troubled by the injury in the opening set, clutching several times at his right hamstring and visibly limping in between games.

He led the opening set 3-1, before receiving treatment, and Hanescu fought back to win it 7-5.

Tomic pushed and forced the second set to a tiebreaker before rain halted play for more than an hour.

He was well in the tiebreak when play resumed, unleashing several big winners, but Hanescu edged it 10-8.

Tomic decided he’d had enough after being broken in the third game of the third set, shaking hands with Hanescu before leaving the court.