UPDATE: Nick Kyrgios' Paris run has ended with a straight sets defeat to Croatian 10th seed Marin Cilic in the French Open second round on Wednesday. 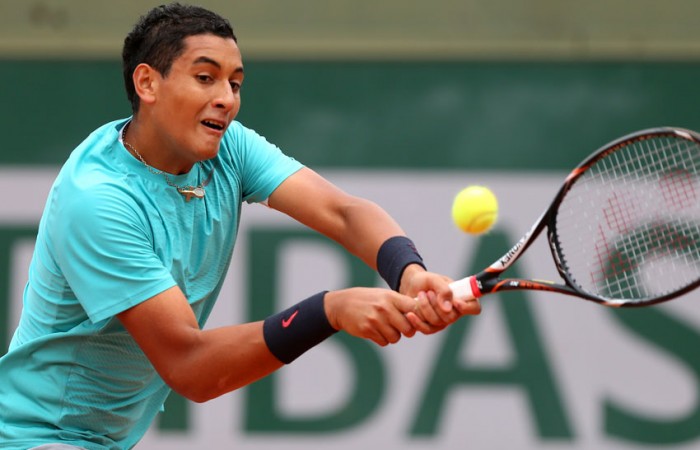 Following his superb first-round upset over Czech Radek Stepanek, Kyrgios unsurprisingly found the going much tougher as he fell 6-4 6-2 6-2 in the biggest match of his fledgling career.

Still, the 18-year-old – the youngest man in the singles draw – gave another good account of himself and will be sure to benefit from his first taste of the top level.

The world’s top-ranked junior had only earned a late wildcard call-up after injury forced compatriot John Millman to withdraw.

However he made the most of his chance when he surprised veteran Stepanek with a straight sets win on Monday.

Just as in that first-round triumph, Kyrgios started nervously against world No.11 Cilic on Wednesday, failing to win a point in the opening two games.

He grew into the match steadily but couldn’t make up lost ground as Cilic took a one-set lead.

The world No.262 suffered what appeared to be a left hamstring injury early in the second set, calling a trainer for treatment, and Cilic raced away with the set.

Kyrgios continued to fight hard in the final set but Cilic’s class shone through as he set up a third round match against either Spaniard Daniel Gimeno-Traver or Serbian Viktor Troicki.

“It was a dream come true playing against someone of his level,” Kyrgios said after the loss.

“I thought I competed pretty well to the end. I could have gone down 6-0 in that third set but I competed all the way.”

Kyrgios hoped the injury wouldn’t threaten his juniors campaign but refused to use it as an excuse.

“I was feeling it a little bit but it wasn’t really bothering me too much,” he said.

“I was getting run around the court, so full credit to him.

“I wouldn’t change this experience for anything. To even be a part of this whole tournament’s been an unbelievable experience and to have come across Radek Stepanek and got the win in the first round, it was a mind-blowing experience.”

Kyrgios, who won the junior title at the Australian Open in January, is still expected to contest the junior event at Roland Garros.