Nick Kyrgios made a spectacular start to his Grand Slam career with a straight-sets upset of Radek Stepanek in French Open first round on Monday. 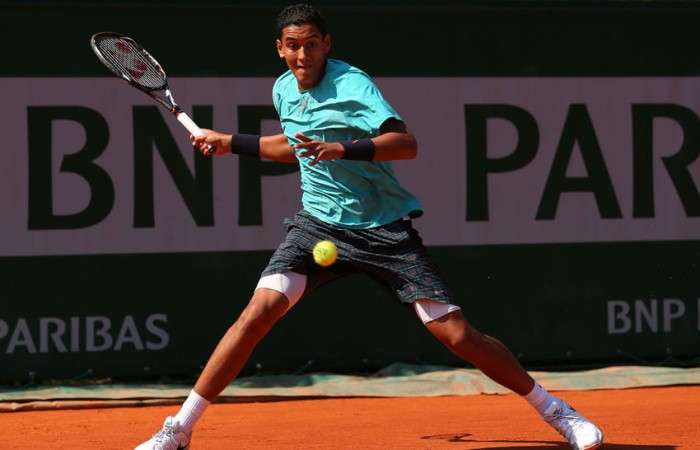 Australian teenager Nick Kyrgios made a spectacular start to his senior Grand Slam career with a straight-sets upset over Czech veteran Radek Stepanek in French Open first round on Monday.

The 18-year-old Kyrgios, the youngest player in the draw who only earned a wildcard spot after the injury withdrawal of compatriot John Millman, defied his age and world ranking of No.262 to post a 7-6(4) 7-6(8) 7-6(11) first-round victory.

He is the first Australian player through to the second round, where he will face Croatian world No.10 Marin Cilic.

Kyrgios signalled his exciting potential by winning the Australian Open junior title in January and has slashed has ranking by almost 600 spots since the start of 2013.

He vowed he would not simply be making up the numbers in Paris and backed it up with the biggest win of his fledgling career against 34-year-old Stepanek, a former top-ten player now ranked 57th.

“It (winning the match) felt about 10 times better than the championship point at the junior Australian Open,” Kyrgios said.

“I can’t really describe the feeling, to be honest. I just looked over at everyone that’s been helping me over the last couple years. It was an unbelievable feeling.”

Playing on court 17 at the far reaches of Roland Garros, Kyrgios’ nerves were clear to see in the opening games.

But he settled after fighting back from 15-40 down to hold his first service game.

He grew in confidence throughout the set, causing Stepanek problems with his big serve and booming forehand.

The towering teenager came from 3-1 down in the tiebreak to take the first set, pumping his fists in front of an enthusiastic crowd.

The players traded breaks early in the second set but Kyrgios staged an gutsy fightback to go two sets up in another tiebreaker.

With the set seemingly out of his grasp at 6-1 down, he saved five straight set points before converting his second opportunity.

The third set was decided in another epic tie-break, with Kyrgios converting his fourth match point when Stepanek volleyed into the net and the teenager raised his arms in celebration.

“It was obviously an unbelievable experience even walking out to be part of such a great tournament,” he said.

“I want to thank Tennis Australia for that opportunity.

“My goal today was just to go out there and enjoy every moment and give my best effort from the first point to the last. If I won today it was a bonus.”

Kyrgios still plans to play in the juniors at Roland Garros.

Stepanek said he could have a bright future on the senior tour.

“When you’re good in the juniors, it doesn’t mean you’re automatically going to be good in men’s tennis,” Stepanek said.

“But definitely he has some talent. He’s serving big and if he keeps working hard, he definitely has a chance.”