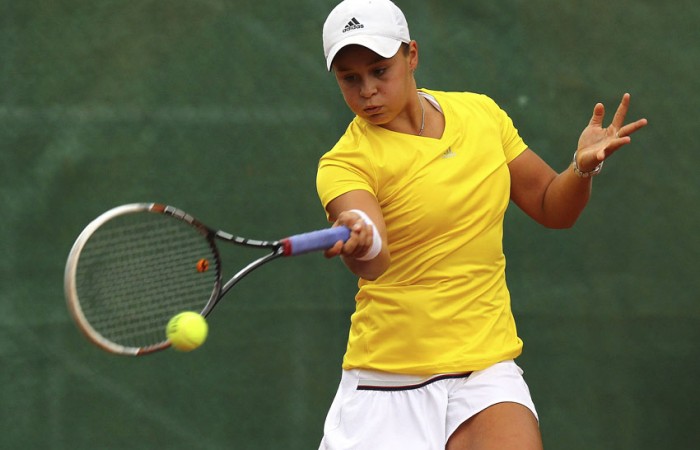 After two days of frustrating rain delays, Australia needed less than four hours to win the World Group Play-off tie as matches were played simultaneously on the competition’s reserve day on Monday.

With the tie poised at 1-1 after the opening singles rubbers, captain Alicia Molik made the savvy decision to substitute Barty in for Jarmila Gajdosova in the reverse singles, after Gajdosova had lost her opener in straight sets to Romina Oprandi.

Barty found herself facing Stefanie Voegele – a player ranked 129 places higher at world No.56 – and played exemplary tennis, winning 6-3 6-4 to give the visitors a 2-1 lead.

> check out images of Barty in singles action

“It’s unreal. Getting out there and playing for your country is really something special, and to get a win is just a bonus,” Barty reflected after the match.

Asked whether or not she was nervous, she replied: “Not really. I had all the girls around me urging me on. It was just so much fun out there, and I was able to play some really good tennis, and it was really good.”

The impressive win on clay in Chiasso ensures Molik’s team will compete in the top eight for the second straight year.

Molik praised her players’ professional approach despite the lengthy delays and justified her bold decision to name Barty for the reverse singles, with the 16-year-old showing composure beyond her years.

“We believed putting a fresh player in, even in Ash’s first Fed Cup match, would definitely work in our favour,” Molik said.

“It did and it proved she was ready. I think she’s been ready for a while now and eager to get out and play.”