Rafter: Tomic can be figurehead

Australian Davis Cup captain Pat Rafter believes Bernard Tomic is showing signs of growing into a role as a future leader for the green-and-gold. 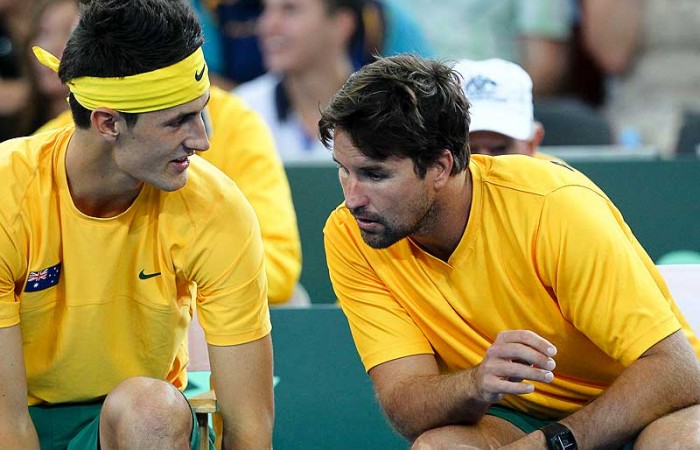 Australian Davis Cup captain Pat Rafter believes Bernard Tomic is showing signs of growing into a role as a future leader for the green-and-gold.

Rafter, overseeing the Australian team’s preparation ahead of this weekend’s Asia/Oceania Group I second round tie against Uzbekistan, said that his relationship with Tomic had improved, good signs for the team’s future progression.

“There’s been really good dialogue … I’m telling him where I’m coming from and there’s no secrets,” Rafter told AAP.

“He’s heading in the right direction and that’s all I can ask from him right now.

“In years to come, he can really start being a figurehead for us. He’s still a fair way off but he’s making improvements.”

At world No.43, 20-year-old Tomic is Australia’s top-ranked male player and sports a sparkling 8-2 record in Davis Cup play.

Another encouraging stat is that he owns a 2-0 head-to-head record over Uzbek No.1 Denis Istomin, with both victories coming last year and being decided in straight sets.

The second of those victories came on clay in Monte Carlo, the same surface being used to decide the tie in the regional Uzbek city of Namangan.

Uzbekistan has won its past six ties at the indoor Sports Complex Pahlavon facility, where this weekend’s tie is to be staged.

Rafter said it would be a tough ask to unseat the Uzbeks on home soil, but that he expected his team – in addition to Tomic comprising Lleyton Hewitt, Marinko Matosevic and Matt Ebden – to fight in the traditional Aussie spirit.

“That way, I’m proud regardless of if we win or lose,” he said.

“But until we get under that pressure situation … we’ll wait and see how everyone goes under these tough circumstances.”

The order of play for the Australia v Uzbekistan tie is expected to be released later today.