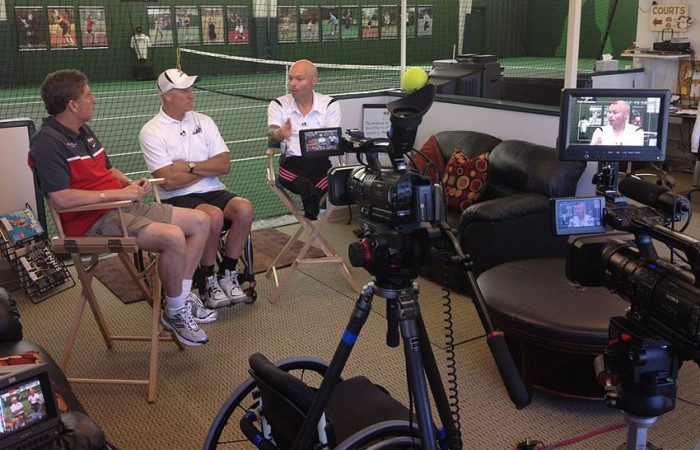 Hall, who was inducted into the Sport Australia Hall of Fame in 2010, said: “Rich is the master at teaching the wheelchair game, it’s a real honor for me to be involved in this project with him. I remember when I first started playing wheelchair tennis, to have something like this available would have been so helpful, also with tennis you never stop learning and ‘Let’s Roll’ covers all areas.”

Over the course of a 15-year career Hall succeeded in winning over 80 tournaments worldwide, including nine Australian Open titles, eight US Opens, seven British Open titles and six Paralympic medals.

Berman has been by his side providing knowledge and guidance throughout the years, and runs Rich’s Tennis School near Boulder, Colorado.

He has almost 20 years experience teaching tennis to wheelchair players, and explains that there was a need for a learning resource out in the community.

“Over the years we both have had many players, parents and organisations ask us for guidance about coaching wheelchair tennis. When David agreed to collaborate with me on this project, I said ‘OK mate, let’s do it’,” he explained.

Berman’s goal is that the tutorial will have far-reaching appeal.

“Our hope is that all current and future wheelchair players and coaches worldwide will use ‘Let’s Roll’ as the foundation for learning and teaching this wonderful sport. That is the reason we have two primary sections – one for the novice and one for the advanced player.”

As for how rewarding wheelchair tennis has been in Berman’s coaching career, he said: “Anyone that has volunteered their time and effort for a worthwhile cause understands that they receive more than they give.  I remember the first time I was asked to coach someone in a chair, I declined to do so, at least at first. Then I gave it a go and I’m so thankful I did.”