Aussie junior is new world No.1

On Monday, Kyrgios, favourite for the junior boys' championship, will be elevated to world No.1 junior. 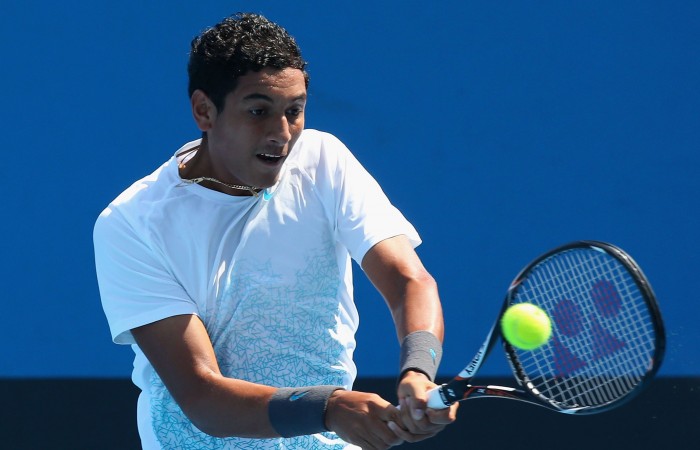 17-year-old Nick Kyrgios from the ACT has restored some local pride at the Australian Open.

On Monday, Kyrgios, favourite for the Australian Open junior boys’ championship currently being played at Melbourne Park, will be elevated to world No.1 junior.

Inspired by Roger Federer and modelling his game on Jo-Wilfried Tsonga, Kyrgios backed up his success at last week’s prestigious Open lead-up event at Traralgon with an ominous first-round win in Melbourne.

“Obviously there was a lot of expectation on my performance this week and I thought I started off well,” Kyrgios said.

“There’s a lot of pressure but going on last week I’ve got a lot of confidence and belief in my game now, so I’m really glad my form’s there.

“I get the No.1 ranking tomorrow so possibly winning the whole thing would be my main goal now.

“But I’m just trying to not think about that yet, take it one match at a time, get through these early rounds first and, hopefully if I get far enough, then I can start thinking about that.”

Kyrgios said reaching the summit was the reward for four years of hard work and devotion to the game.

“Obviously it’s a great accomplishment. There’s been some really good players that have been the No.1 junior,” he said.

“That’s where my serve started to really kick on,” he said.

“I’ve been getting a lot of confidence from that and my transitioning into the net has gotten a lot better in singles as well, not being so afraid at hitting the ball and coming to the net.

Kyrgios, who is hoping to follow in the footsteps of countryman Bernard Tomic (2009) and Luke Saville (2012) as an Open junior champion, said Federer and Tsonga were his heroes.

“But my favourite player is probably Jo-Wilfried Tsonga. I sort of model my game around his a bit – a really big serve and I try to dictate with my forehand.”

Sara Tomic, the 14-year-old sister of Bernard, will play her second-round match on Monday.

Here’s how the Aussies fared in the first round: