A late call-up to replace the injured John Isner, 16-year-old Aussie Thanasi Kokkinakis gave Fernando Verdasco all he could handle at the Hopman Cup. 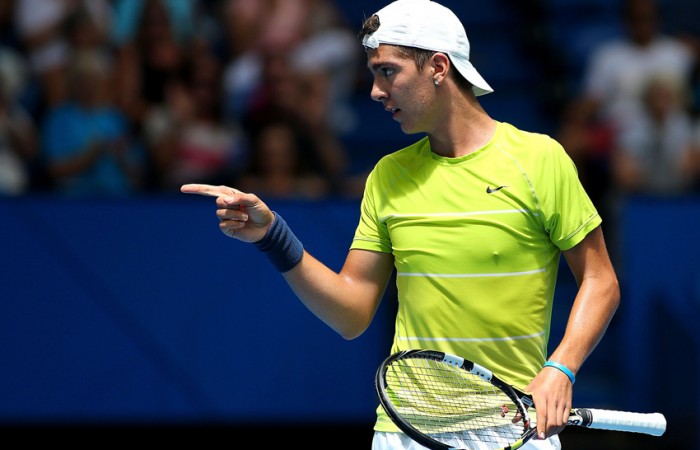 At just 16 years of age and currently ranked world No.756, you could forgive Thanasi Kokkinakis for being a little over-awed in his Hopman Cup debut.

The Aussie youngster was a late call-up to replace the injured American John Isner, for whom Kokkinakis had been acting as a hitting partner this week in Perth.

Playing for the United States alongside Venus Williams against Spain to give the large crowd at Perth Arena the show it deserved, the teenager found himself up against former top 10 star Fernando Verdasco, and very nearly created a massive upset.

Showing a maturity and pace of shot beyond his years, Kokkinakis stuck with the Spanish world No.24 – another player he’d practised with this week – for much of the match, leading in the opening set tiebreak before eventually going down 7-6(4) 6-3.

“This morning I was [nervous when I got the call-up] but then I started to find a bit of rhythm on court and I felt a little bit better settling into my service games and that helped. If I got broken early it might’ve been a bit different with the match but I felt pretty good and I found a bit of rhythm during the start of the match and that helped me a little bit,” he said.

“It was unreal, biggest crowd I’ve played [in front of] and a pretty good feeling, it was a bit unexpected. First time using Hawkeye as well which is pretty cool, I got one right so I was pretty happy.”

The South Australian, who will next week compete in Australian Open qualifying, said the match against Verdasco was a great opportunity to test his game against one of the world’s best and see where he was at with his own game.

“I don’t think he played his best but I tried to do what I could … the intensity was a whole different to what I’m used to and I’m really looking forward to playing more matches like that,” Kokkinakis said.

“Obviously he’s a great player and I’m a fair way away but I don’t know, hitting with him I felt good and I think just a few things – maybe with my movement, keep getting stronger, serving, the return – just those few areas are the big ones and if I can get those right I think I’ll have a good shot [at future success].”

The Hopman Cup appearance was certainly a step up in competition level for Kokkinakis, who was still playing junior events in 2012.

He did also play some senior tournaments in the past 12 months, yet these were all at the ITF Futures level, and he never encountered an opponent ranked higher than 300.

The fact that he acquitted himself so well – his heavy serve, cracking backhand and brutal forehand were especially impressive – did not go unnoticed by Verdasco, who was full of praise for the young Australian after the match.

“He will be a great player if he can keep going like that, he’s so young, he’ll have enough time, he have unbelievable serves for his age and also very good forehand and backhand,” the Spaniard commented.

“As soon as he gets stronger, that is normal because he’s only 16 years old and then he get like fitter and he start to move better and [can play] longer rallies and all that, he’s going to be for sure a great player.”