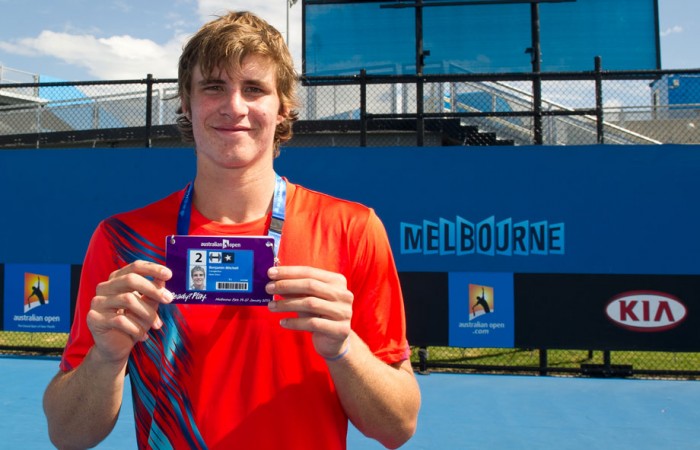 The 20-year-old will play in his second Australian Open after losing to the highly rated John Isner in the first round of the event earlier this year.

Speaking after the match Mitchell said he was hoping to go one step further at next year’s tournament.

“James Duckworth won a round last year so hopefully I can win a couple of rounds, which would be amazing and I don’t think it’s far away either,” Mitchell said.

“I was actually pretty happy, I did well. My coach was actually a little bit annoyed he actually thought I could have won, I was 4-1 up in the second set,”

“It showed me that he was 10 in the world the difference was only a few points so it gives me a bit of belief.”

Signs were ominous early for a seemingly fatigued Mitchell who was backing up after a five-set thriller yesterday, as his opponent Reid raced to a 3-1 lead in the first set.

But the Queenslander showed his grit and determination breaking back before surging towards a 6-3 win in the first set.

The second set proved a hotly contested encounter with both players desperate to take home the wildcard on offer.

The defining moment of the set came when a Mitchell service game went to deuce 10 times with scores at 4-3.

Fittingly a tiebreaker was required to split the pair as Mitchell used Reid’s inconsistency on serve to his advantage and took a commanding two sets to love lead.

But Reid was not down and out, wrestling his way back into the match by quickening the tempo of play.

Eventually the revised game plan paid off as the No.3 seed grasped the all important break to take a 3-1 lead before closing out the set.

Fatigue finally began to really take its toll on Mitchell as the trainer was called to the court to assist with toe and leg injuries.

Reid started the fourth set with all the momentum and looked like he would force his younger opponent into another five-set marathon after he broke Mitchell to take an early 2-1 lead.

But Mitchell broke back immediately and was able to hold out against the attacking Reid to secure the fourth set 6-4.

Mitchell confirmed he was struggling with fatigue throughout the match in the aftermath of his marathon semifinal clash yesterday.

“I’m playing for an Australian Open wildcard and I think I proved myself. My fitness levels are extremely high.”

“I think everyone could tell I was very tired, I couldn’t get my legs moving, I wasn’t actually sure if they were going to get moving,” he said.

Mitchell said he was looking forward to preparing for the first Grand Slam of 2013.

“I’m just going to top up my fitness and I’ll definitely have a week off now because I haven’t had a week off all year.”