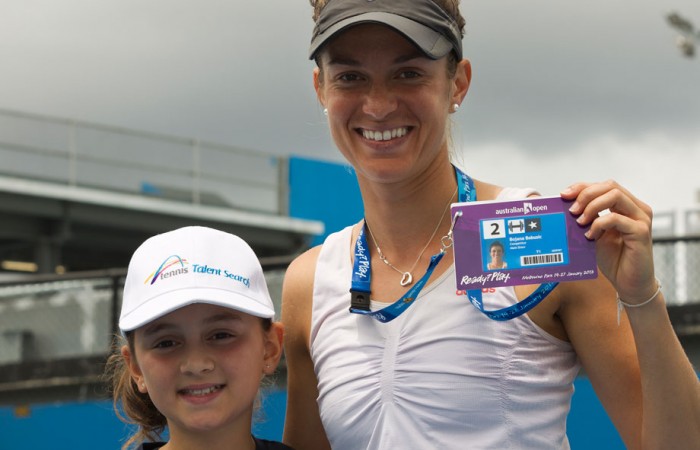 With the rain holding off to allow play to commence as scheduled at 11 am, Monique Adamczak began strong, smashing out the first point and granted herself a 40-0 lead on Bojana’s first service.

An opportune drop shot cemented the first game for the NSW player, allowing Adamczak to establish an early break.

Following this initial upset, Bobusic delivered a string of flawless groundstrokes, a trend that would flow throughout her play, which forced her third-seeded opponent to inevitably make the error.

It was not long before Bobusic turned the game around, threatening Adamczak’s service game, rushing ahead 15-40.

Adamczak retaliated to even the score to deuce however a double fault on break point enabled Bobusic to break back, levelling the set at 1-1.

From there the West Australian took control of the match, pushing her opponent to reach challenging returns.

Bobusic achieved a remarkable 40-0 hold in the fourth game before setting the point up for a perfect forehand winner down the line to break ahead for a comfortable 3-1 lead.

The third seed perhaps allowed the frustration of being down to overpower her as she tried to match Bobusic’s aggressive play. Further unforced errors on Adamczak’s part contributed to Bobusic breaking again to build a confident 5-1 lead.

Serving for the set, Bobusic remained calm, refusing to allow nerves to scratch her powerful performance. Despite offering some excellent returns, Adamczak’s efforts appeared to pose no challenge for Bobusic who comfortably served out the set 6-1.

The second set began with an exciting rally as the two challenged one another to a duel; a point whose victor would gain sound confidence levels to enter the remainder of the match.

Bobusic’s drop shot volley bounced short of a scrambling Adamczak who was unable to make contact with the ball before the second bounce.

On the Sydneysider’s serve, Bobusic yet again surged forward to an impressive 40-0 lead and an error by Adamczazk secured Bobusic the first game of the second set.

Bobusic continued to launch precise, hard groundstrokes despite advances made by a determined Adamczak to shake the West Australian’s almost seamless game.

Achieving some success in the sixth game on Bobusic’s serve, Adamczak made the most of an opportunity to put away the point with a quick, forceful smash to finally break back.

She went on to hold serve to pose a more threatening close on Bobusic’s 4-3 hold. But that would be as close as she would get, with Bobusic closing out the second set 6-3.

Having suffered from a foot injury on two occasions in the past year, Bobusic is determined to remain healthy and fit to ensure she is able to showcase her best tennis in 2013 and to hopefully play in each of the Grand Slam tournaments.

“I’ve had a bit of a tough year with injuries,” she said after the match.

“I wasn’t able to travel as much as I would have liked this year because of my foot, but along with that I’ve learnt how to manage it and look after it.”

She is set to head home to Perth tomorrow to recover for a few days before getting back on court to prepare for the Australian Open.

“The goal is 2013, not necessarily this tournament so it’s just trying to put everything in perspective and work on specific things in my game and trying to get a good start for 2013.

“Tennis is what I do and it’s what I love to do.

“It’s great that it’s just all starting to come together.”