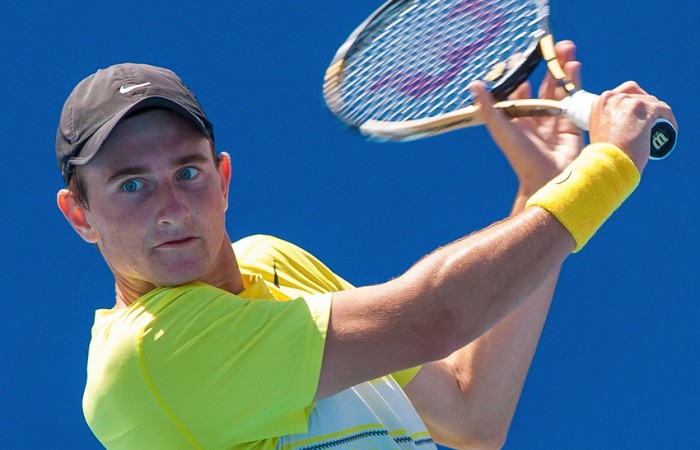 Round two of the Optus 16s Australian Championships got underway on Thursday with the country’s best 16-and-under players battling it out in the extreme heat and wind conditions to secure a position in the quarterfinals.

Michelle Pits, 14, found herself up against Andrea Dikosavljevic on Court 11 first up, with both making efforts to change the pace of the game – avoiding long, grinding rallies in the heat at all costs – by mixing up their play with angled volleys and smashes, making for interesting points.

Dikosavljevic’s played up to her third seeding, displaying fierce ground strokes and established technique to clinch a 7-5 6-3 win.

“The best part is just enjoying tennis, the whole atmosphere of it,” Dikosavljevic reflected.

“Tennis is so important to me. Even if I choose to go to college in America, my tennis will put me through college. I need tennis for everything.”

Around the same time, Lyann Hoang and Madison Frahn battled through a marathon match lasting around three hours.

Frahn countered Hoang’s top spin with consistency to force long rallies, but in the end it was Hoang who finally seized the win 7-6(3) 5-7 6-1.

“I started cramping at the end there, of the third set, so I’ll have to make sure I recover before my next match,” Hoang said.

Optus 16s boys second round action also commenced on Thursday, with Scott Webster displaying a sequence of precise lobs that fell into the far corners of the court.

Yet this was no match for confident top seed Bradley Mousley, who continuously pounded down his fiery top spin forehand, sending the ball spiralling toward the sidelines with tremendous force.

His quick 6-2 6-1 victory was hardly surprising after his exceptional success in the 18s Championships last week, where Mousley admirably reached the quarterfinals after overwhelming opponents beyond his years.

Mousley will face Jake Delaney in the quarterfinals.

The match between Daniel Guccione and South Australian Kurtis Willson went to a third and deciding set as both boys matched one another’s aggressive games.

In the end, Willson upset the third seed, clinching the match 3-6 6-3 7-6(4) in brutal heat and securing a quarterfinal showdown with sixth seed Akira Santillan.

Following them into the next round will be Daniel Nolan, Harry Bourchief, Mitchell Pritchard and Lawrence Bataljin, also intent on being crowned the Optus 16s champion for 2012.

The boys’ doubles matches were snatched by Dominic Bechard and Cormac Clissold, and Harry Bourchier and Bradley Mousley’s winning streak continued after an impressive 6-0 6-0 victory.