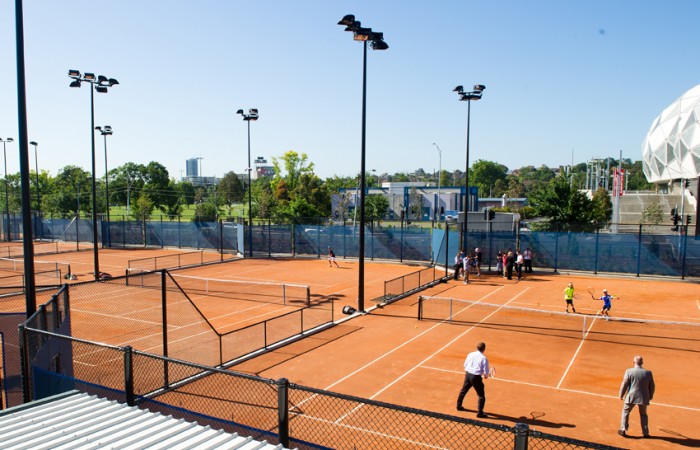 The courts, a part of the Victorian government’s $366 million redevelopment of Melbourne Park, will be key features of the new Eastern Plaza project which includes enhanced facilities for athletes and more spacious public areas.

Victorian Minister for Sport and Recreation Hugh Delahunty said the courts are a major step forward in ensuring Melbourne remains at the forefront of international sporting events.

“Melbourne Park’s got a big reputation as (being) the best sporting precinct in the world and the clay courts here now give us that flexibility where we can bring the best athletes in Australia (and) the best tennis players here to the National Training Centre to play on hard courts or on the clay courts.

“The main thing is this $366 million redevelopment at Melbourne Park really locks us in to having the Australian Open here until 2036, and that’s an enormous filler for Tennis but importantly it fills up our major events calendar.”

With around one third of the world’s premier tennis events currently played on clay, the courts will provide players with an avenue to train and learn on a prevalent surface on the professional circuit.

Tennis Australia’s Head of Professional Tennis Todd Woodbridge said the courts are crucial for the development of Australia’s up-and-coming youngsters.

“This (clay) is the perfect development surface,” Woodbridge said.

“We haven’t had it as it is in Australia before and so to have eight courts of this quality here at Melbourne Park, it’s just perfect for our juniors.”

Woodbridge said the modern game is played on slower courts with a higher bounce – a stark contrast to 20 years ago – and the new courts will help juniors develop the necessary style.

“This is about our development, and development is producing the next champion,” Woodbridge said.

“This isn’t a traditional Australian surface – grass is. We were serve-volleyers, we were aggressive-type players, but we’ve got to change that mentality and we’ve got to teach our young players to have very sound all-court games.”

“I can’t tell you how important this is,” Fitzgerald said.

“When we talk about clay courts, it’s not just a third of the world’s tournaments that are played on clay, it is the best court surface to teach a young tennis player his craft, without a shadow of a doubt.